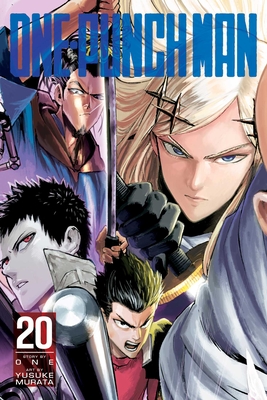 This is book number 20 in the One-Punch Man series.

Immediately before the big Monster Association battle, the Class-S heroes hold a strategy meeting. Unfortunately, they just aren’t in sync, and when Amai Mask barges in, the situation only gets worse. Thankfully, King appears just in time to boost their morale—and it’s a good thing, too, because suddenly the big monster battle begins!
Manga creator ONE began One-Punch Man as a webcomic, which quickly went viral, garnering over 10 million hits. In addition to One-Punch Man, ONE writes and draws the series Mob Psycho 100 and Makai no Ossan.