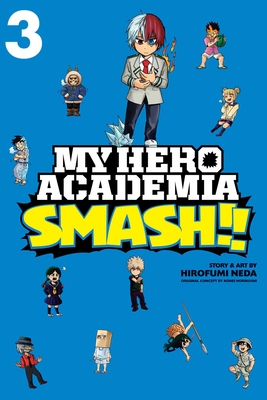 This is book number 3 in the My Hero Academia: Smash!! series.

Hilarious hijinks featuring the characters and story lines of My Hero Academia!

The superpowered society of My Hero Academia takes a hilarious turn in this reimagining of the best-selling series! Join Midoriya, All Might and all the aspiring heroes of U.A. High, plus memorable villains, in an irreverent take on the main events of the series, complete with funny gags, ridiculous jokes and superpowered humor!

This volume of the My Hero Academia parody series treats hero education like a joke! First, the aspiring heroes of U.A. High enjoy fun in the sun on their summer break. Then, exams are replaced by silly student vs. teacher games assigned at random! Plus Izuku and company in Halloween costumes and as animals! What are we teaching these kids?!
Hirofumi Neda began his professional career as a manga artist in 2007, winning the Akatsuka Prize Honorable Mention for his short story “Mom Is a Spy.” After publishing several other short stories, he began working as an art assistant to Kohei Horikoshi on Oumagadoki Zoo and later on My Hero Academia.

Kohei Horikoshi was born in Aichi, Japan, in 1986. He received a Tezuka Award Honorable Mention in 2006, and after publishing several short stories in Akamaru Jump, his first serialized work in Weekly Shonen Jump was Oumagadoki Zoo in 2010. My Hero Academia is his third series in Weekly Shonen Jump.