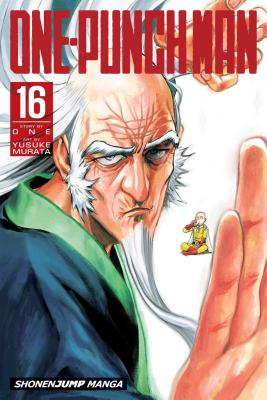 This is book number 16 in the One-Punch Man series.

Surrounded by heroes, Garo finds himself in a tight spot. But despite the great numbers, he defeats the heroes one by one with his unmatched strength before Genos comes rushing in! Meanwhile, Saitama is reaching the height of irritation in his own battle…with King?!
Manga creator ONE began One-Punch Man as a webcomic, which quickly went viral, garnering over 10 million hits. In addition to One-Punch Man, ONE writes and draws the series Mob Psycho 100 and Makai no Ossan.