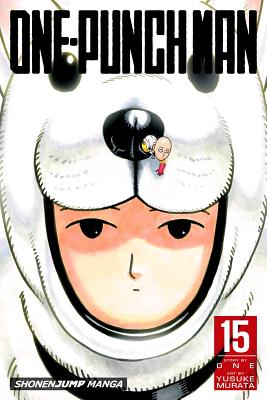 This is book number 15 in the One-Punch Man series.

Despite just finishing a martial arts tournament and immediately dealing with the Monster Association invasion, Saitama still proves to be so incredibly strong that he feels empty inside. King lectures him on how to live like a hero, but it doesn’t help. Meanwhile, servants of the Monster Association close in on Speed-o’-Sound Sonic!
Manga creator ONE began One-Punch Man as a webcomic, which quickly went viral, garnering over 10 million hits. In addition to One-Punch Man, ONE writes and draws the series Mob Psycho 100 and Makai no Ossan.