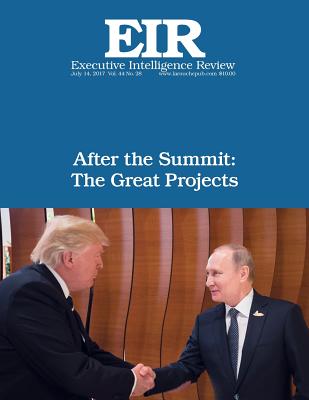 
Not On Our Shelves—Ships in 1-5 Days
(This book cannot be returned.)
July 8-In the last few weeks, LaRouche PAC organizers have intersected a "mass-strike" phenomenon at campaign tables all over the country. The lead sign is "Defend Trump, Stop Here," flanked by signs on China's Belt and Road Initiative, and pictures of Trump, Xi, and Putin wearing photo-shopped "Make America Great Again" hats. Organizers report that the rate of people pulling over and signing up is reminiscent of the summer of 2009, when Americans were up in arms about the impending murderous Obamacare. Who are these people lining up to defend the President? They are patriotic Americans, formerly the working "middle class" of the United States, who were driven to desperation by the 60-year-old "post-industrial society" policy capped by the Bush-Obama looting scheme known as the "bailout." They are what both FDR and President Trump have called "the forgotten man." At post offices in Long Island, Staten Island, New Jersey, and even in Manhattan, the people signing up are welders, bricklayers, pipefitters, carpenters, heating and air-conditioning techs, corrections officers, medical staff, and other working, or skilled and looking-for-work people. Many of their immediate family members have been casualties of the suicidal drug culture-although not all of them are willing to discuss it. They are mobilized, because after the defeat of the pro-Wall Street and pro-war-with-Russia Hillary Clinton, Obama's clone, in November, these forgotten men and women began to develop confidence in the power of their own voices. With the defeat of Hillary Clinton, they had finally made themselves heard. Even as President Trump succeeds in wresting his foreign policy from the desperate grasp of the British Imperial neocons-with important and successful meetings with President Putin and President Xi, as at the Hamburg G-20 gathering-the new relationship with these powerful nations gives him a greater potential to act within the United States to alleviate the desperate conditions currently faced by most Americans. It is urgent that Lyndon LaRouche's Four Laws, starting with the reinstatement of Glass-Steagall, and concluding with the fusion energy-driven platform, be taken up immediately. First of all, the real physical infrastructure of the United States is crumbling. This is true across the whole nation, but is about to become the most obvious in New York City when the "Summer of Hell" begins this Monday, July 10, as 3 to 5 of Penn Station's 21 tracks are taken out of commission for badly needed repairs. Since March of this year, there have already been three derailments at Penn Station. However, it is not only at Penn Station that the transportation infrastructure is in decrepit condition-there have been other derailments in the New York Metropolitan Transit Authority system, and the condition of the area's roads and bridges is no better. There is simply no room for shifting commuter traffic from one approach to another, and New York City is the place of employment for millions of people, so the outcry, if chaos sets in, will be heard around the world. Of course, it's not just New York. Remember the February 2017 failure of the Oroville Dam spillway see page 30], which threatened tens of thousands of Californians with being wiped out by a raging flood of water moving downhill, had the heavy rainstorms continued just a little longer.