Spy Daughter, Queer Girl: In Search of Truth and Acceptance in a Family of Secrets (Paperback) 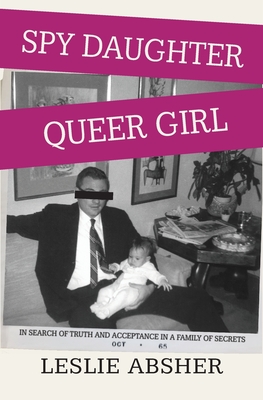 Spy Daughter, Queer Girl: In Search of Truth and Acceptance in a Family of Secrets (Paperback)

For Leslie Absher, secrecy is just another member of the family. Throughout childhood, her father's shadowy government job was ill-defined, her mother's mental health stayed off limits--even her queer identity remained hidden from her family and unacknowledged by Leslie herself.

In SPY DAUGHTER, QUEER GIRL, Absher pursues the truth: of her family, her identity, and her father's role in Greece's CIA-backed junta. As a guide, Absher brings readers to the shade of plane trees in Greece, to queer discos in Boston, and to tense diner meals with her aging CIA father. As a memoirist, Absher renders a lifetime of hazy, shapeshifting truths in high-definition vibrance.

Infused with a journalist's tenacity and a daughter's open heart, this book recounts a decades' long process of discovery and the reason why the facts should matter to us all.

"The fierceness of Absher's courageous quest to learn the gut-wrenching truths of her father's obfuscations parallels her search for her own truths in struggling to know herself as a gay woman....This book is a treasure."

--Kathryn Watterson, author of Women in Prison, Not by the Sword, and I Hear My People Singing

﻿"A riveting examination of identity and how the people who raise us make us-and how we all must continually remake ourselves. A moving portrait of a father-daughter relationship defined by secrets so big they spanned continents. Absher writes with heart, humor, and the grace that comes with forgiveness-the ultimate mission impossible."

--Jessica Pearce Rotondi, author of What We Inherit: A Secret War and a Family's Search for Answers

"Leslie tells her story with soul-searing honesty, plenty of self-deprecation and humour. In working through her own story, confronting her difficult past, she's revealed the human damage - most often to innocents - inflicted by the espionage "game" played out on the global chessboard."

--Ian Callaghan, producer of the Audible Original series My Dad the Spy