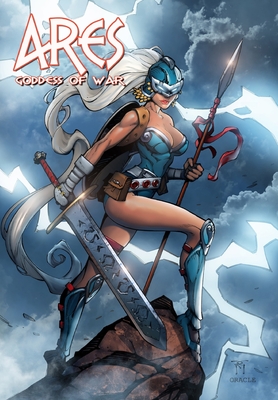 The TidalWave Universe holds many heroes, but none are stronger or more determined than the women. The Tenth Muse, Judo Girl, the Dollz, Victoria's Secret Service, and others defend the Earth from enemies both terrestrial and extraterrestrial, mystic and magical, and human.

But they've never faced a challenge like Ares: The Goddess of War.

After years in exile, Ares hatches a plan that will win her favor and, with luck, Zeus will call her home. The problem? Where Ares goes, destruction and mayhem follow, and her plan will lay waste to Earth and anyone who crosses her path.

It's Ares, the Goddess of War versus everyone Can anyone stop her? Collecting issues #1-4, Ares: Goddess of War is an action-packed story featuring the female heroes of the TidalWave Universe. None of them will escape unscathed.