Trying to Save Piggy Sneed (Paperback) 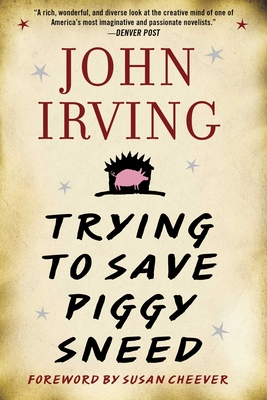 Trying to Save Piggy Sneed (Paperback)


In Stock—Click for Locations
Now available again, "A rich, wonderful, and diverse look at the creative mind of one of America's most imaginative and passionate novelists" (Denver Post).

Here is a treat for John Irving fans and new readers alike. Trying to Save Piggy Sneed contains a dozen short works by the author, beginning with three memoirs. The longest of the memoirs is "The Imaginary Girlfriend," his candid account of his twin careers in writing and wrestling, which, as the Denver Post observed, is filled "with anecdotes that are every bit as hilarious as the antics in his novels . . . [and] combines the lessons of both obsessions."

The middle portion of the book is fiction. Over a career that spans fourteen novels, these are the six stories that Mr. Irving considers finished. Among them is "Interior Space," for which he won the O. Henry Award. In the third and final section are three homages: one to Günter Grass and two to Charles Dickens. To each of the twelve pieces, he has contributed author's notes, which provide some perspective on the circumstances surrounding the writing of each piece. For readers who prefer a hardcover, this commemorative edition is a book to treasure. For readers new to the author of works as moving and mischievous as The World According to Garp, A Prayer for Owen Meany, and In One Person, Trying to Save Piggy Sneed is the perfect introduction.

The edition has a foreword by Susan Cheever that was first published in the twentieth anniversary edition of the hardcover.
John Irving was born in Exeter, New Hampshire, in 1942. His first novel, Setting Free the Bears, was published in 1968, when he was twenty-six. He competed as a wrestler for twenty years, and coached wrestling until he was forty-seven. Mr. Irving has been nominated for a National Book Award three times—winning once, in 1980, for his novel The World According to Garp. He received an O. Henry Award in 1981 for his short story “Interior Space.” In 2000, Mr. Irving won the Oscar for Best Adapted Screenplay for The Cider House Rules. In 2013, he won a Lambda Literary Award for his novel In One Person. An international writer—his novels have been translated into more than thirty-five languages—John Irving lives in Toronto. His all-time best-selling novel, in every language, is A Prayer for Owen Meany.
"A rich, wonderful, and diverse look at the creative mind of one of America's most imaginative and passionate novelists." —Denver Post

“Supple and energetic as a stylist, Mr. Irving also knows just how to create in the reader's mind a vivid impression of an existing world—and just how to populate it.”—New York Times Book Review

"These pieces are worth saving and savoring. . . . Trying to Save Piggy Sneed is a welcome oasis on the long desert passage leading to John Irving's next novel."—Seattle Times/Post-Intelligencer

"Candid . . . colorful . . . Those who have followed John Irving's writing career will delight in his newest, Trying to Save Piggy Sneed. . . . Readers will leave this book feeling as if they have had a terrific conversation with Irving about why he writes and how he goes about it."—USA Today

"The essays on himself and other writers make the book valuable, for they tell us a great deal about Irving's view of fiction."—Newsday

"[This] affable collection of fiction and nonfiction is never less than opinionated."—Detroit News/Free Press

"Irving proves himself, once again, a garrulous and engaging raconteur."—Publishers Weekly

"[This] newest book is a first for Irving: a collection of memoirs, short fiction, and essays. Trying to Save Piggy Sneed features tributes to Dickens and Günter Grass, whose novels percolate with a political and moral courage Irving admires. It also includes six short stories, a form Irving doesn't claim as his own. Reminiscences round out the collection, from his caustic recollections of an awkward dinner with former President Reagan to the title piece, in which the death of his town's garbage collector symbolically sparked the teenage Irving's desire to write."—Minneapolis Star Tribune

"His homage to Charles Dickens, 'The King of the Novel,' is a love letter to one of my favorite childhood writers. It is also good biography and excellent criticism. His final essay on Günther Grass will make you want to discover that idiosyncratic genius if you haven't already."—San Diego Union-Tribune

"Captivating . . . In essence, an invaluable handbook of the writer in action. In understanding the truths of John Irving's worlds, we are shown how to understand the truths of ours."—Anniston Star

"What's best about this memoir is that Irving, fine storyteller that he is, somehow sidesteps the limelight. What this piece is really about is mentorship and friendship and the feelings Irving carries for those who have helped him make his way. It is but another display of the wide and generous spirit that powers the best of Irving's fiction."—BookPage