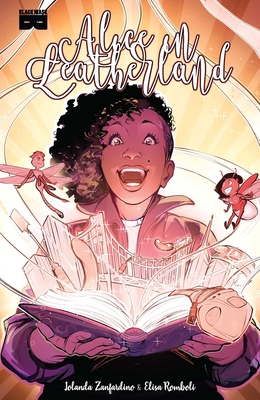 
Not On Our Shelves—Ships in 1-5 Days
“This romantic comedy, written by Iolanda Zanfardino and Elisa Romboli, who are a couple, is most assuredly for adults: The story depicts — sometimes with little left to the imagination — the ups and downs of casual sex.” (-The New York Times)

Alice, a young writer of children's story books, is hurtled out of her fairytale-like life when she discovers her girlfriend has been cheating on her! Charmingly defiant, she leaves her small forest town and leaps into a new adventure to seek love (and find herself) in the fast life of San Francisco. There, her concept of pure, magical love will be completely overturned--but her biggest challenge won't be reckoning with other people's sexual drive, it'll be getting a grip on her own!

From your new favorite writer and artist team of Iolanda Zanfardino and Elisa Romboli, Alice In Leatherland is a comedy about sex and so, inevitably, about every other aspect of life, too. As Iolanda and Elisa describe the book: “Sex is recounted as a way to investigate our relationship with ourselves and others, with our bodies and our place in the world; sexual pleasure as self-affirmation and growth. There is room for Love, too, and bravery. And for many good laughs, that never hurts.”
Iolanda Zanfardino is a comic book artist, writer and cover artist currently working for Black Mask Studios, Image comics, Titan Comics, Marvel and several independent publishers. Her first Original Graphic novel "Midnight Radio" was published by Lion Forge comics. After a long arduous “I'll do what I really love!” process, she finally works on queer (love) stories, and she's so excited she still can't even believe it. She likes rock musicals, street art, Pride parades, dystopian literature and brave heartwarming comedies.

Elisa Romboli is a comic book artist and illustrator currently working for Black Mask Studios, Image comics, Titan Comics and various independent publishers, partnered briefly with Marvel and with Square Enix for promotional illustrations. Co-author of Helen Bristol published by Shockdom. Since she was a child, her dream has always been to be a comics artist. The thing is: she didn't know what she was getting into. Now she's almost completely absorbed into drawing, has forgotten everything else. Cat owner full time.
"Meet Alice, a writer of children’s books with a huge heart … that is absolutely crushed when she discovers her girlfriend is cheating. The crisis inspires her to seek a new life, and perhaps a new love, in San Francisco. This romantic comedy, written by Iolanda Zanfardino and Elisa Romboli, who are a couple, is most assuredly for adults: The story depicts — sometimes with little left to the imagination — the ups and downs of casual sex. One conceit of the five-issue story, which wraps up in August, is that each chapter includes scenes of a fairy tale by Alice, about a firefly who is seeking a mate."
— George Gene Gustines, The New York Times

"A romance story that isn’t afraid to get messy and real about relationships while riffing off traditional fairy tale tropes."
— Logan Dalton, Graphic Policy

"Honestly, my only complaint is that I was annoyed when I ran out of pages to read."
— Zachary Whittaker, Bigger Than Capes

"Alice in Leatherland is everything you'd want from a romance tale. Adorable, funny, insightful and just friggin gorgeously drawn. I hope this is just one of many such books from this creative team because my wallet is ready! Seriously! Buy this book!"
— -Stjepan Sejic (Sunstone)

“YOU SHOULD READ IT. Sexy, fun as hell and interesting.”
— -Mirka Andolfo (Unnatural, Sweet Paprika)