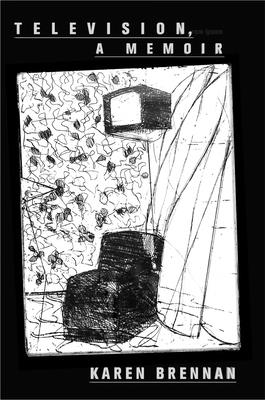 Television, a memoir is a hybrid collection of autobiographical pieces, tragi-comic in spirit, that depict a woman’s life evolving through time and culture in fragmentary glimpses. Indeterminate in genre, Television is a fluid text that sometimes reads as poetry, sometimes as prose, while exploring classism, ableism, and feminism in a world defined by the advent of new media and, for the author, a privilege that often felt suffocating. Working structurally and thematically, television creates conceptual mileposts in the memoir, with certain programs and cultural references corresponding to specific eras in the author’s past, but it also gestures at an existential modality — the experience of a televisual life, the performative arrangements of nuclear families and neighborhoods, the periodic events and dramas of an adolescence watched from outside oneself.

Karen Brennan is the author of fiction, poetry, and nonfiction. A recipient of a National Endowment of the Arts fellowship and an AWP award, she is Professor Emerita of English and Creative Writing at the University of Utah. Her stories, poems, and essays have been included in anthologies from Norton, Penguin, Graywolf, Georgia, and Michigan, among others. Since 1991, she has served as core faculty in the Warren Wilson MFA Program for Writers. Television, a memoir is her eighth book.

“I’ve been a serious and devoted fan of Karen Brennan’s work for decades, and her new book is perhaps my favorite. It is a memoir and an anti-memoir. It tells the story of a life, but kaleidoscopically, elliptically, aphoristi- cally, ecstatically. What it’s really about is the frenzy of the visible behind and beneath and beyond the life lived. In that way, deeply reminiscent of Edmund Carpenter’s Oh, What a Blow That Phantom Gave Me!—than which there is hardly higher praise.”
—David Shields

“Imagine working in miniature and implying the whole world in each passage. Karen Brennan is that kind of writer, and she does it again and again in Television, a book that resonates not like a conventionally structured memoir, but something more intricate and alive: a hive of songs that are at once astringent, tender, comic, and rueful. I loved every word.”
—Paul Lisicky

"In her prose-poem memoir, Television, Karen Brennan distills a complex life to its essence: observant child, overwhelmed mother, and loving grandmother. Astute and wonderfully strange, Brennan’s language pushes into the knotted muscle of experience till the hurt dissolves into the deeply pleasurable release of recognition: Yes, that’s it. That’s just it."
—Debra Spark