Opioids for the Masses: Big Pharma's War on Middle America and the White Working Class (Hardcover) 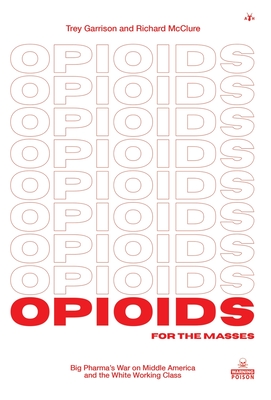 Opioids for the Masses: Big Pharma's War on Middle America and the White Working Class (Hardcover)

When does a crisis become a crime?

Most importantly, who are the victims? In this investigative tour-de-force, Trey Garrison and Richard McClure delve into the human stories behind the epidemic which has killed over 400,000 Americans since 1999 and destroyed the lives of millions more. Down winding roads and up beautiful mountains, the journey into this modern heart of darkness is narrated with grim detail and interspersed with research giving systemic context to personal stories. Throughout it all, rays of light shine through in these accounts of the courage, perseverance, and dignity of those who have overcome or are fighting back against a force so much stronger than themselves out of love for their people. Well-sourced and hard hitting, this book is a must have for anyone who wants to learn more about the sad state of the forgotten man.

At a time when good journalism is the exception to the rule, especially when the victims are rural Whites, these authors provide a sobering look into the Opioid Epidemic. Antelope Hill is proud to present Trey Garrison and Richard McClure's Opioids for the Masses, the true story of an America that has been forgotten and betrayed.