With the Bark Off: A Journalist’s Memories of LBJ and a Life in the News Media (Hardcover) 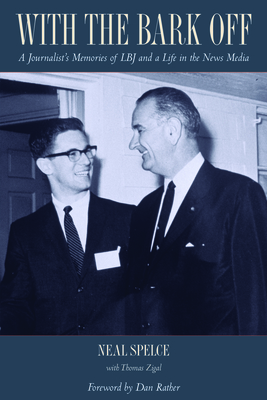 With the Bark Off: A Journalist’s Memories of LBJ and a Life in the News Media (Hardcover)


Backordered
What if you got a call from Lyndon Johnson to be in Washington DC tomorrow to take a trip around the world? If you are twenty-four-year-old broadcast journalist Neal Spelce, you buckle up. A two-week diplomatic dream trip turned into a lifelong rollercoaster ride. Spelce began his career as a part-time journalist in the LBJ family-owned Austin TV station in 1956, which vaulted him into a lifetime of memorable experiences with Johnson and many icons of the twentieth century. From his live reporting during the UT Tower shooting tragedy to his lifelong association with LBJ, Spelce found himself behind the scenes in many of the twentieth century’s crucial moments. The Austin-based journalist shares candid moments with LBJ and five other US presidents, including a rare interview with father and son presidents George Bush while the three were cramped together in a small bass boat on a Texas lake. During his lengthy media career, Spelce saw Austin grow from a college town to a thriving city. Along the way he interacted with Texas legends such as Darrell Royal, Willie Nelson, Dan Rather, and more, all part of entertaining stories that he tells, as LBJ liked to say, “with the bark off.”
Neal Spelce, an award-winning journalist, has worked as a TV anchor and media consultant for more than sixty years.Thomas Zigal is an award-winning novelist who lives in Austin, Texas.