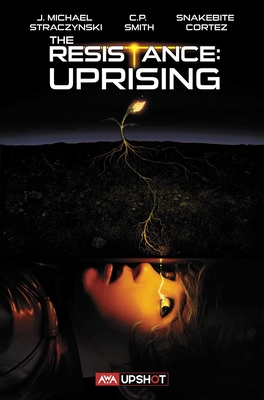 This is book number 2 in the The Resistance series.

Acclaimed writer J. Michael Straczynski returns to the prescient, ambitious world of The Resistance! In the wake of the assassination of their leader, the Resistance is in disarray, disconnected from each other and hunted by authorities around the world – including an army of “reborns” recruited by the American government. To avert decimation at the hands of a fascistic government crackdown, the Resistance must discover the ace up their sleeve, and then the key to unlocking it.
Straczynski has worked in every medium except poetry, at which he sucks. His film credits include five films that collectively earned over a billion dollars: Changeling for Clint Eastwood, Thor for Kenneth Branagh, Ninja Assassin, Underworld Awakening, and World War Z. He has written over 300 produced episodes and seven TV movies, and has been a creator/show-runner for such series as Babylon 5, Jeremiah, Crusade, and, most recently, Sense8 for Netflix. His comics have sold over 13 million issues, including stints on Marvel’s The Amazing Spider-Man, Thor, Fantastic Four, and others. His Superman: Earth One graphic novels for DC Comics consistently appeared on the NY Times Bestseller List. His creator-owned titles include Midnight Nation, Dream Police, and Rising Stars. He currently heads the creative council for the comics publishing company AWA (Artists, Writers and Artisans) and his first title, The Resistance, debuted in 2020 with several additional titles scheduled for 2021. He was nominated for a Best Screen Writing BAFTA (British Academy Award) for Changeling, and has received the Eisner Award, the Inkpot Lifetime Achievement Award, the Hugo Award (twice), the SDCC International Icon Award, the Saturn Award, the Ray Bradbury Award, the Christopher Foundation Award, the E Pluribus Unum Award from the American Cinema Foundation, two technical Emmy’s for Babylon 5, the GLAAD Media Award, and dozens of others. His autobiography, Becoming Superman, was published in hardcover by HarperCollins Voyager in 2019 to glowing reviews in the Washington Post, New York Times, Entertainment Weekly, NPR, the Los Angeles Review of Books and the Wall Street Journal. His new novel, Together We Will Go, will be published by Simon & Schuster’s prestigious Gallery/Scout Press imprint in July 2021, with his book Becoming A Writer, Staying A Writer, debuting a month earlier from
BenBella Books. He is also writing two ten-episode audio dramas for Penguin-Random House: Dunwich, and an anthology series, The Far Horizon that will debut summer/fall 2021. He holds two Bachelor Degrees, one in Clinical Psychology and another in Sociology, and teaches Advanced Scriptwriting in the MFA program at San Diego State University. Finally, as a former journalist, he has written over 500 published articles while working for the The San Diego Magazine, The Los Angeles Times, TIME Inc, Writer's Digest, The Daily Californian and other newspapers and magazines. He lives in Los Angeles and likes it a lot.


CP Smith is known for his rigid art and gritty detail. His style is inspired by artists like, Tomm Coker, Katsuhiro Otomo, Bill Sienkiewicz, Kevin Nowlan, and Chris Sprouse. Typically, he uses excessive amounts of photo reference for his art, drawing inspiration for character faces from his personal friends.