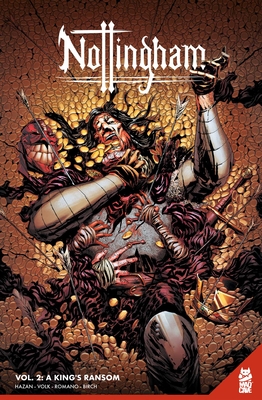 
Not On Our Shelves—Ships in 1-5 Days
Everard Blackthorne, the Sheriff of Nottingham, is strongarmed into working with Robin Hood after Richard the Lionheart is kidnapped by the Holy Roman Emperor Henry VI.

When Richard the Lionheart is kidnapped and ransomed by Holy Roman Emperor Henry VI, Everard Blackthorne, the Sheriff of Nottingham, is strongarmed into delivering the ransom and bringing the King home, on penalty of death. The treacherous Prince John and his ally, King Phillip of France, will stop at nothing to ensure Richard remains in captivity, so the Sheriff finds the unlikeliest of allies in none other than Robin Hood and the Merry Men. With Robin and the Sheriff away, Marian hatches her own devious plan to take back Nottingham.
David Hazan is a comic book writer and editor based in Melbourne, Australia. He is the writer and creator of the hit series Nottingham, from Mad Cave Studios and a winner of the Mad Cave Studios 2019 Talent Search. David’s clients include Mad Cave Studios, Gestalt Comics and more.

Shane Connery Volk is the lead singer and songwriter for Canadian rock band, One Bad Son. Over the last 18 years, Volk’s commanding stage presence and soaring vocal range has captivated fans. OBS has toured with Def Leppard, Judas Priest, and Shinedown, among many others, and landed a coveted spot on the 2019 Rolling Stones tour. In embracing the full spectrum of his art, Volk has also embarked on his career as a professional comic book artist, winning Mad Cave Studios talent search in 2019. His first series is the medieval noir Nottingham with publisher Mad Cave Studios. This five-issue series has become a hit, with each issue receiving multiple printings. The success of Nottingham has brought Volk one step closer to a lifelong aspiration, to draw comics and make music his whole life - more art all the time!

Luca Romano is an italian comics colorist, TTRPG enthusiast, and omnivorous metalhead. Luca is the colorist for Weft, but you may also know him as the colorist for Nottingham, his work with Advent comics, and/or other various indie projects he has worked on. As a young kid Luca spent too much time reading, playing cello and guitar, role playing, and gaming. He hasn’t stopped any of that yet, just added coloring to the list.

Justin Birch is a 2018 Ringo Award nominated letterer born and raised in the hills of West Virginia. Lettering comics since 2015, he is a member of the lettering studio AndWorld Design and has worked with DC, IDW, Dynamite, Lion Forge Comics, Mad Cave Studios, Action Lab Comics, DMC Comics, Source Point Press, Z2 Comics, and numerous indy publishers. Justin still lives in West Virginia, only now it’s with his loving wife, daughter, and their dog, Kirby.
One of Comicon.com's BEST COMICS ARTISTS OF 2021
One of Comicon.com's BEST WRITERS OF 2021

"This team of artists continues to deliver highly strong, violent imagery and horrifically impactful panels, that drives this story and really makes the whole series stand out from any other re-imagined Robin Hood project in history. It’s dark and twisted but never forced. It never feels like the imagery is forcibly gruesome. It only ever feels spot-on for the tone of the story and helps bring the whole world to life."
— Media Mallrat

"This book is an unbelievable take on the Robin Hood classic tale."
— First Comic News

"Hazan is proving to be a master at dramatic tension time and time again."
— Comical Opinions