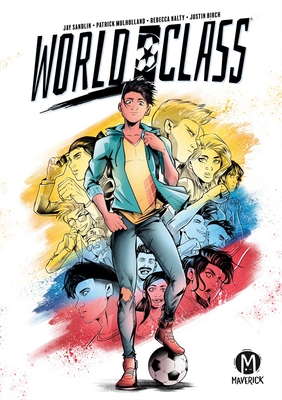 
Not On Our Shelves—Ships in 1-5 Days
Football is a religion where Adrian “The Colombian Cannon” Molina comes from and with his wicked right leg, he has a clear shot to the promised land of the European Junior Leagues. But when a football scout offers him a full scholarship to an elite prep school in London, the news seems too good to be true. His enrollment hits a snag upon meeting the team’s star striker, Titan Evans. Titan is everything Adrian is not; rich, powerful, connected, and with a hunger to dominate the school as well as the pitch. The constant fighting, teasing, and bullying, brings about crippling anxiety of losing his spot on the team. That’s until Luciano DeSilva takes him under his wing, and gives Adrian the confidence to be himself and value his position on the team. From visionary writer and podcaster Jay Sandlin (Over the Ropes), illustrator Patrick Mulholland (Power Rangers), and superstar colorist Rebecca Nalty (GLOW) comes a foot- ball story, that blends the energy and heart of Shonen manga with a story about finding the right people in your life to not only make you a better player, but a better person.
Jay Sandlin is a visionary writer and podcaster, as well as a history buff. Since self publishing his first anthology and picture book back in 2017, Jay has gone on to release Over The Ropes with Mad Cave Studios in 2019, and his first young adult graphic novel, World Class, under the Maverick imprint in 2022.

Patrick is an artist from Belfast, Northern Ireland. He is most well known for his work on Power Rangers and the mini series Zero Jumper. Most days you can find him at his desk finding excuses to draw action scenes on every page.

Rebecca Nalty is a comic colourist currently living in Dublin, Ireland. She previously worked in the animation industry as a background artist on BBC's Danger Mouse, but has been a colourist full time since 2017. Some of her projects include IDW's Star Wars: The High Republic Adventures and GLOW, Mad Cave Studios' Mariko Between Worlds, Dynamite's Xena Warrior Princess 2019 and Vampirella Red Sonja and Vault's Quests Aside and Finger Guns. When she's not working she enjoys spending time with her dog and playing video games.

"Mulholland and Nalty's artwork provides a lively assist and brings the action on the pages to life. With a solid emotional core, this soccer comic will score goal after goal in the hearts of its readers."
— Booklist

"Overall World Class is an exciting visual spectacle backed up by fantastic storytelling from a master of comics. I thoroughly recommend this YA graphic novel for young adults and adults alike. Don’t sleep on this new sports graphic novel that will keep you entertained and cheering from the side-lines!"
— Emerald Reviews

"With a story combining good friends, strong role-models, talent and above all else, hard work, Maverick’s World Class scores with a strong narrative and exciting visuals."
— Geek Vibes Nation

"World Class is an exciting sport comic for young adults. There is such an exhilarating power to the story and the characters that the reader very quickly warms and grows to care for them. Where Roy of the Rovers or Ball Boy from The Beano showcased football culture in England, Sandlin showcases how wide-ranged this sport is. And on the whole, it succeeds with some riveting matches. It could also be very easily be adapted into other formats."
— But Why Tho?

"World Class has everything readers didn't know they could want from a sports series. From compelling, rich characters, to art that instills excitement through its panel work, this is one title to keep an eye on."
— Monkeys Fighting Robots