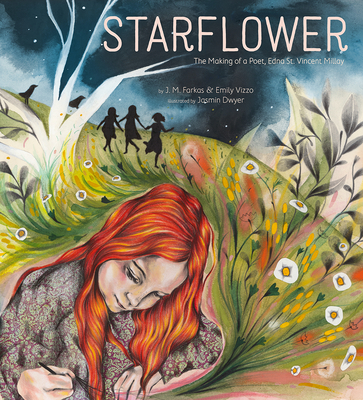 Vincent—American poet Edna St. Vincent Millay—began writing and publishing poetry as a child. She grew up in coastal Maine with her two sisters and plenty of books, music, and nature, but often without parents—her father left home when they were young, and her mother, a nurse, traveled for months at a time to support them. Vincent and her two sisters often had to fiercely fend for themselves, from the daily to-do lists of keeping house, through bitterly cold winters and blight, which proved to be good fodder for indoor and outdoor adventures alike—and for poetry. Gorgeously illustrated by Jasmin Dwyer, Starflower is a poetic picture book biography as fiery and unconventional as Vincent herself.
J. M. Farkas is a poet and an author whose books include Mermaid: Or How to Find Love Underwater, a blackout poetry version of Hans Christian Andersen’s “The Little Mermaid,” published by Cameron Kids. She lives in New York. Emily Vizzo is a published author and educator whose work has been featured in the Los Angeles Times, the North American Review, and Blackbird, among many others. This is her first book with Cameron Kids. Jasmin Dwyer is a fine artist and illustrator originally from Australia. She currently lives in London. This is her debut picture book.
“The authors’ imagery sings. Realistically rendered figures, calico-clad, long-haired, and White-presenting, cavort among stylized, sun-washed meadow flowers. An often lilting celebration of the poet’s early anchors and incipient artistic voyaging.”
— Kirkus Reviews