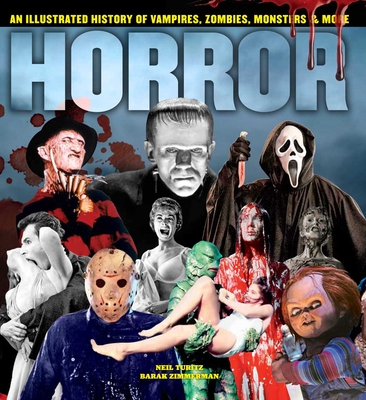 
Special Order—Subject to Availability
Take a deep dive into all things scary from the present day to legends dating back a thousand years. Everything from Bram Stoker's Dracula to Twilight and True Blood for the vampire fans. But why stop there? Frankenstein, werewolves, mummies, zombies, witches and warlocks (yes, they’re real), the supernatural, aliens and much more are all covered in this comprehensive, illustrated guide.

Spanning books to film to legends, horror is one of the highest grossing franchises around. At a time when Americans spend $6 billion at retail every Halloween, this book is the backbone of what makes being scared so fascinating and so much fun. It also takes a look at the current world of horror, how it has changed, and how a modern horror movie could win an Academy Award.

From Blair Witch to Walking Dead, Texas Chain Saw Massacre, Scary Movie, Nightmare on Elm Street, Friday the 13th, and the crossover into real life haunted houses, this book has it all. Any fan of horror will want to immerse themselves in this extensive look at one of pop culture's most popular genres.

We love Halloween, and apparently we love to be scared!
Neil Turitz is an award-winning filmmaker and journalist. Born and raised in Portland, Maine, he moved to New York City for college. He never left. In the years since, he has been working in and writing about Hollywood. His journalistic work has appeared in a variety of publications such as Cosmopolitan, The Hollywood Reporter, Variety, Emmy Magazine, The New York Times, and TV Guide, among a plethora of others (and there is a chance that a movie you've seen over the past several years has some of his dialogue in it). He is a lifelong horror movie fan and still lives in New York, with no immediate plans to leave. Unless, of course, the zombies come. Then he's gone.