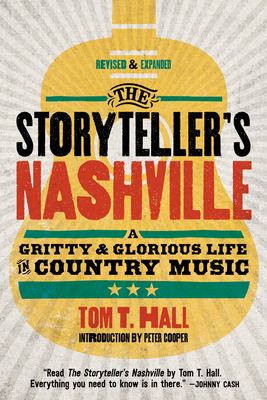 
Coming Soon—Pre-Order Now
The Nashville we know today is a glitzy big business characterized by entertainment lawyers, social media strategies, and buff, shiny entertainers writing about pick-up trucks, tractors, and dirt roads in air-conditioned, corporate offices. But, back before the coats of glamour and media spotlights, Nashville was a very different place. "The Storyteller's Nashville" is about a fabled town that once was, but no longer exists. The Nashville that Tom T. Hall wrote about -- the "hairy-legged town" where hungry, broke musicians searched for their next meal, pill-popping pickers scammed their next hit, and writers found art in moments of quiet, solitary desperation - is the true foundation upon which today's modern Music City rests. "The Storyteller's Nashville" is also about a man whose songs irrevocably altered the history of that same town as well as the music for which it remains best known. And, while "The Storyteller's Nashville" is no longer an up-to-date picture of Music City, it is a valuable window into the nature of the art and creation during its formative days. In the early 1980s, someone asked Johnny Cash what Nashville was really like. Cash said, "Just read The Storyteller's Nashville by Tom T. Hall. Everything you need to know is in there." Tom T. Hall is a Country Music Hall of Famer for many reasons, including the hit songs he wrote, his three decades as a popular entertainer, and the fact that he and a wild-eyed pack of youngsters that included Kris Kristofferson, Roger Miller, Mickey Newbury and John Hartford elevated the language of country music from simple tales into something akin to literature. The wondrous George Jones called Hall "By far the all-time greatest songwriter/storyteller that country music has ever had." Initially published in 1979, this revised and expanded edition of The Storyteller's Nashville includes Tom T. Hall's thoughts on the years after 1979: he shares his deep friendship with Jimmy Carter; brings us Johnny Cash's thoughts on humility; and reflects on the challenging confluences of celebrity, art and the most dangerous addiction known to musicians: applause. "The Storyteller's Nashville" is illuminating and hilarious, ribald and touching and, above all, entertaining. It's Tom T.'s greatest song and it's now longer. And even better.