What, If Anything, Is Out There? (Paperback) 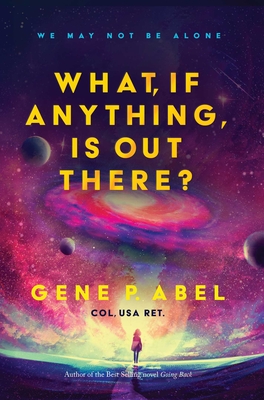 What, If Anything, Is Out There? (Paperback)


Not On Our Shelves—Ships in 1-5 Days
COL (USA Ret) and bestselling author Gene P Abel lays out the truth about UFOs and offers readers a fascinating exploration of the existence of an intelligent extraterrestrial race in this exploration of sightings and their potential impact on the future, and security, of the human race.

There are few events that would be of more importance, or more startling, than if, in the near future, we found ourselves confronted by another intelligent race with abilities and technology far superior to anything that currently exists on Earth. In What, If Anything, Is Out There? Gene P. Abel, COL (USA Ret.), details historic events that may well have been sightings by our ancestors and begins to explore what these encounters could mean for our security in the future. Drawing upon his years of military experience, Abel offers a unique insider’s perspective as he guides readers through a thoughtful history into the Roswell incident of 1947 and beyond.

In the wake of the Department of Defense acknowledgement that the US Navy has encountered UFOs, and in a moment where sightings are on the rise, What If Anything, Is Out There is a timely, and much-needed, look at the role of intelligent life in the universe.
Gene P. Abel brings a successful and diverse educational and professional background to his first science-fiction novel, Going Back. Mr. Abel's formal education includes earning a bachelor of science in finance and a master of business administration. His thirty years as a highly successful business executive in both the private and public sectors overlay his thirty years' service as a commissioned officer in the United States Army and Army Reserve. After graduating as a Distinguished Military Graduate from Penn State, Mr. Abel spent five years on active duty as a regular Army officer and twenty-five years as an Army Reserve officer. He completed the Army War College in 1985 and was awarded the Meritorious Service Medal on two occasions. He had such diverse assignments as nuclear weapons officer and finance officer. Mr. Abel was nominated for brigadier general and retired from the Army as a colonel.