Town & Country: The Queen: A Life in Pictures (Hardcover) 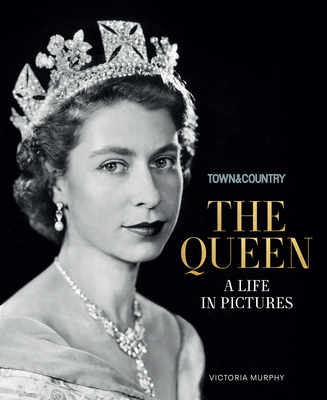 Town & Country: The Queen: A Life in Pictures (Hardcover)


Not On Our Shelves—Ships in 1-5 Days
“Queen Elizabeth II once said, ‘I have to be seen to be believed.’ Well, here is Her Majesty in all her glory—and in delightful personal detail too. Victoria Murphy has created an invaluable photographic tribute to Britain’s longest serving monarch and to her memorable reign.” —Robert Lacey, historian and biographer

After her succession to the throne in 1952, Queen Elizabeth II became respected, celebrated, and beloved around the world. This stunning collection of powerful images illustrates her storied seven-decade reign in all its glory.

More than 300 extraordinary photographs, along with insightful commentary by the royal journalist Victoria Murphy, showcase the significant, historic, and intimate moments throughout the Queen’s life, first as a young princess and then as the longest-reigning British monarch.

The book covers her war years in service; her marriage to Prince Philip; her coronation—the first to be televised; ​her extensive official travels around the world; the glittering diplomatic occasions and encounters with ​world leaders, dignitaries, and celebrities; the pomp and pageantry of ceremonial events; her role as a fashion icon; her relationships with her parents, King George VI and ​the Queen Mother, and her sister, Princess Margaret; the birth of her son and heir to the throne Prince Charles; family life with her four children, as well as her beloved dogs and horses; and the growing role of her grandson Prince William and his wife, the Duchess of Cambridge, as they supported the Queen in her public duties.

Shown here too are the Crown Jewels as well as the Queen’s personal jewelry collection; a look at the royal palaces and residences; and portraits from the stunning royal weddings that have so enchanted the world.

On September 8, 2022, the Queen died peacefully at her home in Balmoral, Scotland. She is survived by her four children, eight grandchildren, and twelve great-grandchildren. Upon her death, Prince Charles ascended to the throne as head of state, starting a new era for the British monarchy. Throughout her rule, with a combination of star power and a profound sense of duty, Queen Elizabeth II steered the British monarchy into the modern era with supreme style and grace. She is truly a queen for all ages and this is the ultimate commemorative book for all royal watchers that captures the triumph and significance of her magnificent reign.
Victoria Murphy has been writing and broadcasting about the British royal family since 2010. She is a contributing editor to Town & Country and a royal contributor to Good Morning America.

Stellene Volandes is editor in chief of Town & Country magazine.

Town & Country magazine is the ultimate resource for a life well lived. It is known for its coverage of leading cultural icons, including the royal family.
“So much of the Queen’s life and career was about the visuals. This luscious coffee-table book is packed with photograph after photograph of Elizabeth in her multiple roles: as happy-go-lucky princess, solemn heir to the throne, bride, impossibly young monarch and all the way through to her latter days as a grandmother to the world. Journalist Murphy supplies useful contextual notes, but the pictures are the stars. They tell us everything we need to know about exactly what we have lost.”
—Kathryn Hughes, The Guardian

“A visual delight, teeming with gorgeous photographs. Victoria Murphy studies every facet of Her Majesty's legacy, creating a fascinating portrait of the Queen's impressively long reign and the dedication she has brought to her duties. This beautiful book is a must-have for all royal lovers."
—Elizabeth Holmes, New York Times bestselling author of HRH: So Many Thoughts on Royal Style

“Queen Elizabeth II from a refreshing new perspective. Victoria Murphy's compelling portrait of Her Majesty – and her analysis of a life-long devotion to duty – is a fitting tribute to the monarch we think we know so well.”
—Joe Little, managing editor of Majesty Magazine

“Queen Elizabeth II once said, ‘I have to be seen to be believed.’ Well, here is Her Majesty in all her glory—and in delightful personal detail, too. Victoria Murphy has created an invaluable photographic tribute to Britain’s longest serving monarch and to her memorable reign.”
—Robert Lacey, historian and biographer