Controlling Mergers and Market Power: A Program for Reviving Antitrust in America (Paperback) 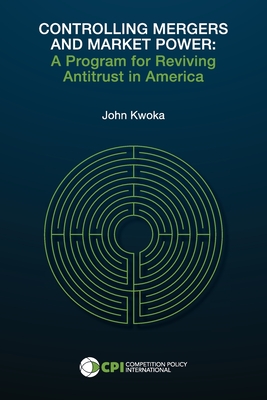 Controlling Mergers and Market Power: A Program for Reviving Antitrust in America (Paperback)

John Kwoka's Controlling Mergers and Market Power: A Program for Reviving Antitrust in America is an important and timely contribution from a prominent antitrust economist and policy advisor. It has been many decades since questions about antitrust enforcement have been so prominent in political, economic, and scholarly debate. Mergers in countless industries, rising concentration throughout the economy, and the dominance of tech giants have brought renewed attention to the role and the responsibility of antitrust policy. But scholarly analysis of these issues, which Professor Kwoka has already contributed to in many ways, is not by itself enough. Once the underlying problems have been identified and documented, commentators and policymakers need to take the next step and provide sensible, enforceable, and economically rational proposals to address them. The purpose of this book is to do just that. Controlling Mergers and Market Power sets out a comprehensive, detailed, and rigorous program to revive antitrust, and merger control in particular, in the U.S. It analyzes the specific failures and weaknesses of current policy. Then, drawing on contemporary economic research and experience, it develops a series of specific proposals for reforming and revitalizing antitrust policy. Collectively, these reforms would reverse the trend toward a narrow, permissive antitrust policy, and strengthen competition in the economy. Few are better positioned to set out a program for reforming antitrust. Professor Kwoka's earlier work on merger policy has been credited for its insights and for prompting renewed attention to the issues. In this new breakthrough contribution, he takes us through the next and necessary steps to revive antitrust in America.