Civilization in Overdrive: Conversations at the Edge of the Human Future (Paperback) 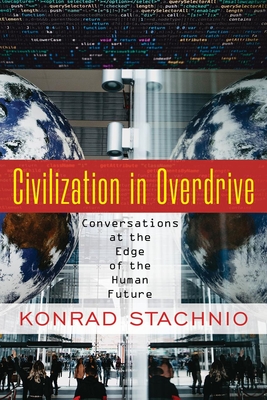 Civilization in Overdrive: Conversations at the Edge of the Human Future (Paperback)


Not On Our Shelves—Ships in 1-5 Days
CIVILIZATION IN OVERDRIVE: Conversations at the Edge of the Human Future provides an astonishing tour of how the world's future looks to those likely to know the most about it. Journalist Konrad Stachnio engages 17 experts, global opinion leaders in their respective fields, in discussions on artificial intelligence, finance, the economy, technology, world order, the military, cultural change and more. His well-researched and probing questions draw out striking revelations from his guests on where 21st century civilization is leading us, raising further questions as to whether we want to go there, and if that could be prevented. The trends anticipated by the interviewees are ground-breaking, sometimes shocking. This book is a plunge into the unexpected, forcing us to bid farewell to our familiar yet increasingly complex world which is irrevocably disappearing before our eyes and morphing into dimensions even more complex and less comprehensible. Interviewees and topics include:
Douglas Rushkoff, named by MIT as one of the "world's ten most influential intellectuals," on whether we still have the chance to be self-determining individuals in the all-encompassing world of algorithms and AI.
John Perkins, the author of the book Confessions of an Economic Hit Man, which spent over 70 weeks on the New York Times bestseller list and has been published in 32 languages worldwide on the global revolution just around the corner.
Aleksandr Dugin, one of the best-known writers and political commentators in post-Soviet Russia, considered one of the most contentious thinkers of the modern world, on whether the modern technological path we take is inevitable.
Tim Draper, one of the most successful venture capitalists of all time, as well as among the most instrumental and prominent people in Silicon Valley today, on Blockchain, cryptocurrencies, and how they will affect finance, economics, and work.
William Binney former geopolitical world Technical Director of NSA about what digital terrorism will look like in the future and whether we already live in the Chinese model of 'social credit'.
Mikhail A. Lebedev, award-winning scientist in the fields of Neurophysiology and Brain-Computer Interfaces on the impact connecting their brains with machines and implanting chips into them will have on people.
Paul Craig Roberts, former Assistant Treasury Secretary, Wall Street Journal Associate Editor,
And more...