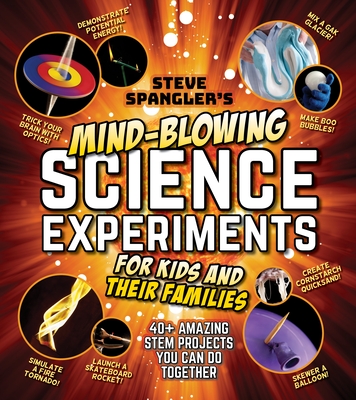 Steve Spangler is one of the most well-known science educators in the country, with regular appearances on Ellen, Fox & Friends and dozens of other programs. His books, YouTube videos and award-winning TV program, DIY Sci, have endeared him to millions of kids.

Now Steve has created a book for them, their friends and their families, with experiments designed to be more eye-popping, more challenging and more collaborative than ever before. Kids will work with friends, siblings, parents or classmates to execute more than 40 fascinating experiments that not only dazzle the eyes, but supercharge the brain, turning real world physics, science, technology and more into unexpected afternoon fun.

From a roaring fire tornado to a skateboard rocket, these experiments will have kids dropping their video games and TV remotes to experience real-world fun that educates as it entertains.

Steve Spangler is an authority on STEM education with more than 1,800 television appearances to his credit. He’s a regular guest on The Ellen Show and the host of the three-time Emmy-nominated television series DIY Sci airing on FOX affiliates nationwide. He is a best-selling author, an Emmy award-winning television personality and a Hall of Fame Speaker Inductee, as well as the bestselling author of three previous bestselling science books for kids, including Smithsonian 10-Minute Science Experiments and Steve Spangler's Super-Cool Science Experiments for Kids.