The Eater of Darkness (Paperback) 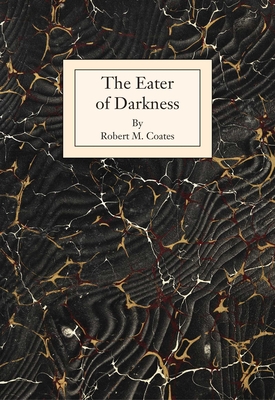 The Eater of Darkness (Paperback)


Not On Our Shelves—Ships in 1-5 Days
Considered by many to be one of the most unique, avant-garde works published by the Lost Generation, The Eater of Darkness is hailed as the first Dada novel published by an American. Previously out of print for more than fifty years, this new edition has been updated with a new introduction and contemporary material that pays homage to the groundbreaking life and career of author Robert M. Coates.

“One of the cleverest tours de force ever contrived by the pen of a wit.”

Young, charming, and fresh from a passionate jaunt in France, Charles Dograr leaves behind his French lover and returns to America to spend a year in New York City.

Eager to make his year in New York one to remember, Charles leaves his boarding house room one night in search of an adventure. As he wanders, Charles stumbles into the living quarters of Picrolas, an eccentric, crazed scientist who refers to himself as “the Eater of Darkness.” Picrolas reveals his prized invention: a remote-control x-ray machine, designed to electrocute and kill at random by shooting “x-ray bullets” into the brains of Picrolas’ intended targets.

Tricked by Picrolas into releasing the trigger, Charles is instantly taken by the machine and the power it holds. After a string of murders ensue, Charles agrees to help Picrolas plot an elaborate bank heist, using the x-ray bullets to kill the bank’s guards and any unlucky witnesses that happen to be on the street during the heist.

As the city is terrorized by these mysterious murders, Charles becomes entangled in the fallout. Characters disappear and reappear; events spiral in a disorienting, antirealistic fashion; and genres collide in an unpredictable, dreamlike conclusion.

Often compared to Flann O’Brien’s The Third Policeman, The Eater of Darkness is many things: both an acclaimed crime novel and a study in surrealist fiction; an experimentation of style, structure, and syntax; and an innovative, avant-garde concoction from an author who wrote years ahead of his time.
Robert Myron Coates was born in 1897 in New Haven, Connecticut. As a member of The Lost Generation, Coates spent much of the 1920s in Europe, where he wrote his first novel, The Eater of Darkness. While living in Paris, Coates brushed shoulders with other literary giants, including Malcolm Cowley, Ford Madox Ford, and Ernest Hemingway (with whom he boxed as a sparring partner). It was his special relationship with Gertrude Stein, however, that helped his first novel find international success.

While abroad, Coates developed his celebrated experimental style with short stories and sketches he published in the expatriate magazines Gargoyle, Broom, and Secession. After the publication of The Eater of Darkness, however, he returned to the United States and began work for the newly established New Yorker magazine, for which he worked as a contributor and an art critic for more than 40 years. It is from these contributions that he is credited with coining the term “abstract expressionism” in reference to the works of Jackson Pollock and Willem de Koonig.

Prior to his retirement in 1967, Coates published four more novels, including Wisteria Cottage and Yesterday’s Burdens, as well as countless works of short stories and nonfiction. Known early in his career for experimental fiction, Coates is considered by many as a pioneer of contemporary literary science fiction, and to this day, his novel, The Eater of Darkness, remains a cult classic among fans of dadaist and early twentieth century science fiction. His art criticism for The New Yorker was definitional and influential for three decades in the post World War II modernist era.

Mathilde Roza is Associate Professor of American Literature and North American Studies at Radboud University Nijmegen, the Netherlands. She is the author of the critical biography Following Strangers: The Life and Works of Robert M. Coates (South Carolina University Press, 2011), which was based on extensive archival research. She has published on American modernism, The New Yorker magazine, and a variety of other topics.