Voices of a Distant Star: Words of Love/ Across the Stars (Paperback) 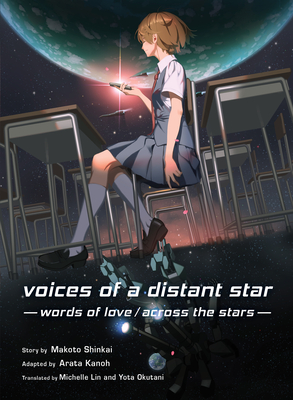 Voices of a Distant Star: Words of Love/ Across the Stars (Paperback)


Not On Our Shelves—Ships in 1-5 Days
Award-winning director and author Makoto Shinkai offers a romantic sci-fi tale about young love and space adventure, based on his animated film. This new novel gives readers more insight into Mikako and Noboru's relationship.
Fans of the original series will again be immersed in the beautiful world of Shinkai.

I vaguely thought it meant anywhere there was cell phone reception.

It’s the year 2046. Mikako Nagamine and Noboru Terao are middle school classmates, tentatively sharing an unspoken first love—but unbeknownst to him, Mikako has been recruited into the UN Space Force, and instead of going on to high school, will join the spacecraft Lysithea to search for alien Tarsians. As she travels further and further to the outer reaches of the solar system, the time it takes for a text message to reach the Earth grows longer and longer. Back on Earth, time passes normally for Noboru, but as the years pass he still can’t forget the voice on the other side of the cell phone…

Steeped in nostalgia and memory, Arata Kanoh brings to the page the award-winning OVA by acclaimed filmmaker Makoto Shinkai, director of She and Her Cat, The Place Promised in Our Early Days, Garden of Words, 5 Centimeters per Second, and the highest-grossing anime film of all time, Your Name.
Arata Kanoh is a writer who has produced novelizations of Makoto Shinkai’s other works, including 5 Centimeters Per Second (also available from Vertical).
Makoto Niitsu, better known by his pen name Makoto Shinkai, is a Japanese film director, animator, and voice actor. A native of the Nagano prefecture in Japan, he studied Japanese literature at Chuo University. He traces his passion for creation to the manga, anime, and novels he was exposed to while in middle school. Considered one of the best animators in the world today, he is often called the "next Miyazaki." Shinkai developed his abilities as a video game designer for FalCon, where he worked on the cult-classic role-playing game Ys. Shinkai is unique as an animator, having cut his teeth producing almost all elements of many of his works - from animation to music composition to voice acting. He has won numerous awards: 12th DoGA CG Animation Award; 1st New Tokyo International Animation Festival Grand Prize; 7th Kobe Animation Prize; 6th Mainichi Films Animation Prize; 2007 Asia Pacific Film Award; and the Lancia Platinum Grand Prize (Italy).