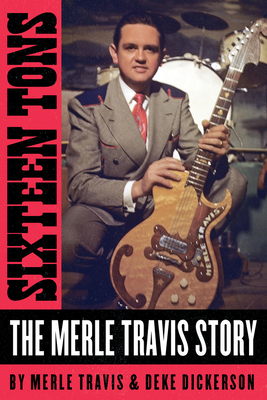 
Not On Our Shelves—Ships in 1-5 Days
Sixteen Tons is the story of Country Music Hall of Fame member Merle Travis, a brilliant, multi-talented, and deeply troubled artist who is widely considered a genius. A world-class guitarist who dazzled audiences with his Kentucky thumb-picking style, Merle was also a pioneering country songwriter who wrote such classics as “Dark as a Dungeon” and “Sixteen Tons.” Additionally, he was responsible for early electric guitar innovations in the 1940s, and was a gifted actor, writer, and cartoonist, among many other talents. This definitive portrait of Travis’s life and career is the result of a recently-discovered treasure trove of Merle’s unpublished autobiographical writings, which have been fleshed out with an immersive deep-dive biography by researcher and musical historian Deke Dickerson. It details the highs of a career that began with a string of nine straight Top 5 singles in the 1940s, and the lows of a lifelong struggle with alcoholism that developed into an addiction to pills that nearly killed Merle when he was running with Johnny Cash in the late 1950s. Travis ultimately reemerged to become a Grammy-winning artist who inspired millions and became a music legend.
Merle Travis was a guitarist, songwriter, singer, actor, cartoonist, and inventor who pioneered the "Travis Picking" guitar style, and was inducted into the Nashville Songwriters Hall of Fame and the Country Music Hall of Fame. The Muhlenberg County, Kentucky, native is best known for such songs as "Divorce Me C.O.D., "So Round, So Firm, So Fully Packed," "Dark as a Dungeon," and the timeless classic "Sixteen Tons." Deke Dickerson is a musician, artist, and music historian who has devoted his career to the preservation of America's roots music traditions. In addition to releasing more than twenty albums, he has written extensively about Gene Vincent, Eddie Cochran, Merle Haggard, and others. His previous books include The Strat in the Attic: Thrilling Stories of Guitar Archaeology and The Strat in the Attic 2: More Thrilling Stories of Guitar Archaeology.