The Pilgrim: A Wall-To-Wall Odyssey (Hardcover) 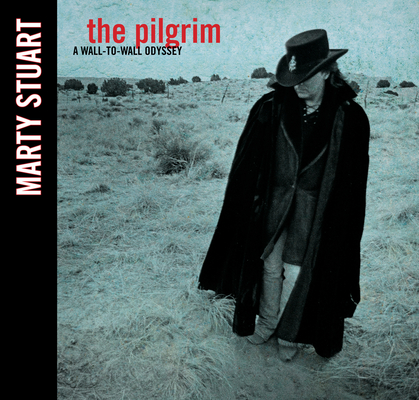 The Pilgrim: A Wall-To-Wall Odyssey (Hardcover)

Marty Stuart’s tenth studio album, The Pilgrim, was released 1999. The risky and ambitious concept project—based on true events that transpired in his hometown of Philadelphia, Mississippi—was a turning point in Marty’s unique artistry. While not a commercial success at the time, The Pilgrim represents a rediscovery of his roots and a creative rebirth that continues to reverberate today as we celebrate the album’s twentieth anniversary.

From the art direction, to the eccentric narrative, to the participation of iconic performers such as Earl Scruggs, Ralph Stanley, George Jones, Johnny Cash, Emmylou Harris, and Connie Smith, The Pilgrim somehow managed to connect with the deepest spirit of country music’s rich traditions while also breaking new ground. It’s impossible to understand Marty Stuart without understanding what led to The Pilgrim and how it has shaped who he is today as an uncompromising artist and an unflinching evangelist for pure country music. Presented here is a lushly illustrated coffee table book that's about much more than just one landmark album. It's about art, discovery, artistic integrity, and a vision that set Marty Stuart on a new path. Also included with the book is a CD of the original album and unreleased bonus material.

Marty Stuart is a country music icon. He is a singer, songwriter, multi-instrumentalist, photographer, essayist, collector, preservationist and defender of country music’s rich traditions. The five-time Grammy award winner and Grand Ole Opry member’s most recent project is Marty Stuart’s Congress of Country Music, a Philadelphia, Mississippi-based museum, concert venue, and educational and cultural facility that will house his personal collection of over 20,000 country music-related artifacts.

"Marty Stuart is the keeper of the Hillbilly Flame" —Emmylou Harris

"This is pure, honest, beautiful art and shouldn't ever be commented on by anyone other than the kind who made it." —Billy Bob Thornton

"When I think of country music I think of Marty Stuart. He is that Pilgrim. There is Marty then there is everyone else of his generation. What sets Marty apart is he embodies his culture, he is the go-to man for country music, say the way Louis Armstrong or Miles Davis were for jazz. Marty is my brother. We see things in a universal, common clarity." —Wynton Marsalis