Every Night Is Saturday Night: A Country Girl's Journey To The Rock & Roll Hall of Fame (Hardcover) 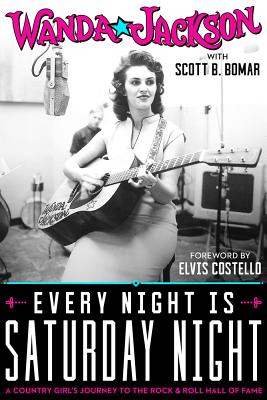 Every Night Is Saturday Night: A Country Girl's Journey To The Rock & Roll Hall of Fame (Hardcover)

By Wanda Jackson, Scott B. Bomar, Elvis Costello (Foreword by)

Wanda Jackson's debut single, "You Can't Have My Love," reached the Top 10 while she was still a sixteen-year-old high school student. She hit the road after graduation, playing package shows with Carl Perkins, Johnny Cash, Jerry Lee Lewis, and Elvis Presley, who gave Wanda his ring and asked her to be "his girl." With Presley's encouragement, the Oklahoma native began recording rock music, often releasing singles with country on one side and rock on the other during her decade-and-a-half tenure on Capitol Records.

Known for her energetic stage shows and pioneering presence as a female artist, Wanda stormed the charts with a series of hit singles, including "Let's Have a Party," "Right or Wrong," and "In the Middle of a Heartache." With more than 40 albums to her credit, Wanda has proven to be an enduring and genre-defying legend of American music.

In Every Night is Saturday Night, Wanda tells her own story of getting discovered by Country Music Hall of Famer Hank Thompson; shy she refused to return to The Grand Ole Opry for more than fifty years; the challenges she and her integrated band, The Party Timers, faced in the early 1960s; finding the love of her life; her recent work with rock luminaries Jack White and Joan Jett; and how her deep faith has sustained her over more than seven decades of rocking, shocking, and thrilling audiences around the globe.

Known as the queen of rockabilly, Wanda Jackson combined grit with glamour to set a new template for country music's "girl singers" of the 1950s. With urging from Elvis, she soon showed the world that girls could rock, too! Wanda landed more than 30 singles on the country and pop charts between 1954 and 1974. She is a multiple Grammy nominee, a recipient of the Americana Music Association's Lifetime Achievement Award, and a 2009 inductee into the Rock & Roll Hall of Fame.  Scott B. Bomar is an award-winning writer who has authored or co-authored several books, including Southbound: An Illustrated History of Southern Rock; The Bakersfield Sound: Buck Owens, Merle Haggard, and California Country; and The "Odessey": The Zombies in Words and Images. He earned a Grammy nomination for his liner notes to the rockabilly compilation The Other Side of Bakersfield, and co-hosts the podcast, Songcraft: Conversations with Great Songwriters.  Elvis Costello is a Grammy award-winning musician whose career spans almost four decades. His first three albums all appeared on Rolling Stone's list of the 500 Greatest Albums of All Time. A prolific singer-songwriter, Costello has gone on to release a long list of critically-acclaimed albums, and in 2003 was inducted into the Rock & Roll Hall of Fame.
“I love her. She’s so brilliant. I don’t think Rollin’ in the Deep would exist if it wasn’t for Wanda Jackson.” —Adele

"Look around today and you can hear lots of rocking girl singers who owe an unconscious debt to the mere idea of a woman like Wanda. She was standing up on stage with a guitar in her hands and making a sound that was as wild and raw as any rocker, man or woman, while other gals were still asking, 'How much is that doggy in the window?'" —Elvis Costello

“She’s influential to every modern female singer, whether they know about her or not. She broke down those walls in the beginning, when it was the hardest to do.” —Jack White

“There’s an authenticity in her voice that conjures up a world and a very distinct and particular place in time.” —Bruce Springsteen

“As you look up the history of your roots in music, you don’t find a lot of women. But Wanda Jackson was right there, at the beginning of it….“I learned to sing rock ’n’ roll by listening to Wanda Jackson, but I learned about country music from her, too.” —Cyndi Lauper

“Wanda Jackson, an atomic fireball of a lady, could have a smash hit with just about anything.” —Bob Dylan