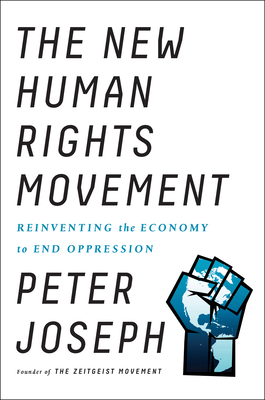 
Not On Our Shelves—Ships in 1-5 Days
Society is broken. We can design our way to a better one.

In our interconnected world, self-interest and social-interest are rapidly becoming indistinguishable. If current negative trajectories remain, including growing climate destabilization, biodiversity loss, and economic inequality, an impending future of ecological collapse and societal destabilization will make "personal success" virtually meaningless. Yet our broken social system incentivizes behavior that will only make our problems worse. If true human rights progress is to be achieved today, it is time we dig deeper—rethinking the very foundation of our social system.

Arguing against the long-standing narrative of universal scarcity and other pervasive myths that defend the current state of affairs, The New Human Rights Movement illuminates the structural causes of poverty, social oppression, and the ongoing degradation of public health, and ultimately presents the case for an updated economic approach. Joseph explores the potential of this grand shift and how we can design our way to a world where the human family has become truly sustainable.

The New Human Rights Movement reveals the critical importance of a unified activism working to overcome the inherent injustice of our system. This book warns against what is in store if we continue to ignore the flaws of our socioeconomic approach, while also revealing the bright and expansive future possible if we succeed.

Will you join the movement?
Peter Joseph is an American-born social critic and activist who has lectured around the world on the subject of cultural sustainability. Once deemed "The Herald of Occupy Wall Street" for his tacit prediction of inevitable global uprisings against inequality and economic injustice, his extensive media work has been translated into over 130 languages and experienced by 250 million people. Working in concert with numerous NPOs and grassroots organizations, Joseph's core focus is on socioeconomic structures that undermine progress in the areas of ecological and social justice. He has been featured and profiled in numerous media outlets, including the New York Times, The Huffington Post, Free-Speech TV, and TED, and has given over a thousand hours of interviews via radio shows and podcasts in the past decade. He is the president of the 501(c)(3) NPO The Zeitgeist Movement and currently resides in Los Angeles.
"Peter Joseph is one of the great visionaries of our time. If there's a beautiful future—and I think there will be—then his fingerprints will be all over it."
—Marianne Williamson, #1 New York Times bestselling author


"Since 9/11, security took over and retired human rights into a small closet. We need to get back to the issue of rights for all. Hopefully this important work will draw us closer to that reality and promise. Without economic realignment with nature to secure our habitat, along with conquering the sociological roots of fragmentation and bigotry, the human family is in peril."

"One of this generation's greatest visionaries delivers a startling exposé about the violent oppression that defines our economic order, while issuing an urgent call for global activism to unite to change it. Amidst a deepening crisis of capitalism and inequality, coupled with an intensifying assault by the Empire's elite, The New Human Rights Movement provides a crucial roadmap for the movement toward the next system."
–Abby Martin, host of The Empire Files