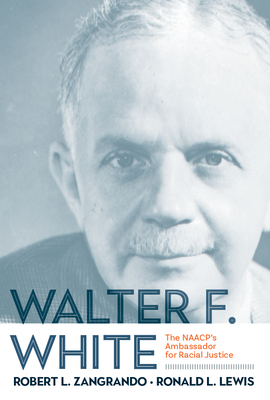 Walter F. White of Atlanta, Georgia, joined the National Association for the Advancement of Colored People (NAACP) in 1918 as an assistant to Executive Secretary James Weldon Johnson. When Johnson retired in 1929, White replaced him as head of the NAACP, a position he maintained until his death in 1955. During his long tenure, White was in the vanguard of the struggle for interracial justice. His reputation went into decline, however, in the era of grassroots activism that followed his death. White’s disagreements with the US Left, and his ambiguous racial background—he was of mixed heritage, could “pass” as white, and divorced a black woman to marry a white woman—fueled ambivalence about his legacy.

In this comprehensive biography, Zangrando and Lewis seek to provide a reassessment of White within the context of his own time, revising critical interpretations of his career. White was a promoter of and a participant in the Harlem Renaissance, a daily fixture in the halls of Congress lobbying for civil rights legislation, and a powerful figure with access to the administrations of Roosevelt (via Eleanor) and Truman. As executive secretary of the NAACP, White fought incessantly to desegregate the American military and pushed to ensure equal employment opportunities. On the international stage, White advocated for people of color in a decolonized world, and for economic development aid to nations like India and Haiti, bridging the civil rights struggles at home and abroad.

Ronald L. Lewis is Stuart and Joyce Robbins chair and professor emeritus of history at West Virginia University. He is the author of several books, including The Industrialist and the Mountaineer: The Eastham-Thompson Feud and the Struggle for West Virginia’s Timber Frontier, Aspiring to Greatness: West Virginia University since World War II, and Transforming the Appalachian Countryside: Railroads, Deforestation, and Social Change in West Virginia, 1880–1920.

Robert L. Zangrando is professor emeritus of history at the University of Akron. He lives in Stow, Ohio.