Life Along the Applegate Trail: A Tale of Grit and Determination (Paperback) 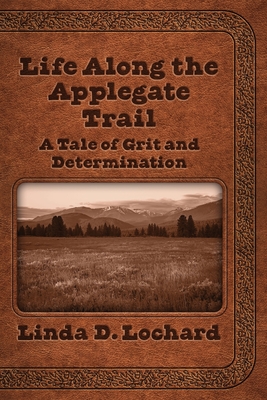 Life Along the Applegate Trail: A Tale of Grit and Determination (Paperback)

Questa has just buried her dead husband, alone under the blazing desert sun.

Chase Gunner has chosen to head West for a better life.

Both are venturing along the Applegate Trail in a caravan of covered, ox-drawn wagons.

Romance sparks when they meet.

Can the chivalrous cowboy win the heart of this beautiful, independent widow?

More importantly, will they survive the treacherous journey which is supposed to be safer than following the Oregon Trail westward?

Dangerous and perilous better describe the six-month journey over 800 miles as Questa, Chase, and dozens of families brave wild animals and mountains, along with the threat of deadly illness, starvation, and harsh weather.

This fictional tale set in 1847 was inspired by the true story of travelers in 1846 who ventured West.

Then, 150 years later, their saga inspired history enthusiast Linda Lochard to join a re-enactment of a 51-day trek along the Applegate Trail.

Along the way, she experienced the grueling realities of wagon train travel-while learning the tragic and triumphant fates of those on the trail 150 years beforehand.

Linda penned Life Along the Applegate Trail: A Tale of Grit and Determination to highlight the travelers' hardships, especially those of women who gave birth in harsh conditions.

Romance, humor, and kindness balance the danger and suffering, as this beautifully written story provides a historic peek at people driven by hope for a better future.

Combine heart-warming romance, treacherous terrain, anxiety of the unknown, and hope for a better future, and you've got the key ingredients in this historic western adventure about the harsh realities along The Applegate Trail as a wagon train made its way in 1847 across plains, mountains, and rivers where bears and cougars lurked, all with the vision of settling on the pristine land of Oregon.

Linda's engaging, suspenseful storytelling puts names, faces, and interesting personalities on this rugged peek back at history that's entertaining and educational all at once. If you love to witness the power of the human spirit to find love and hope while following dreams despite fear and danger, then you need to read this novel.

"I wanted to tell a story that highlights the hope that these people had as they traveled into unknown territory while braving harsh weather, bears and cougars, and threats of Indian attacks," says Lochard. "I also wanted to celebrate the strong women who endured tremendous hardships while giving birth and taking care of children and husbands, as well as cooking during their six-month trip through the blazing heat of the desert and the frigid temperatures on the rugged mountain passes."