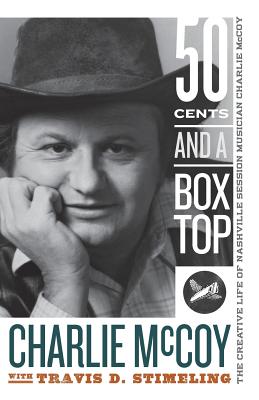 
Not On Our Shelves—Ships in 1-5 Days
From Ann-Margret to Bob Dylan and George Jones to Simon & Garfunkel, Nashville harmonica virtuoso and multi-instrumentalist Charlie McCoy has contributed to some of the most successful recordings of country, pop, and rock music of the last six decades. As the leader of the Hee Haw “Million-Dollar Band,” McCoy spent more than two decades appearing on the television screens of country music fans around the United States. And, as a solo artist, he has entertained audiences across North America, Europe, and Japan and has earned numerous honors as a result. Fifty Cents and a Box Top: The Creative Life of Nashville Session Musician Charlie McCoy offers rare firsthand insights into life in the recording studio, on the road, and on the small screen as Nashville became a leading center of popular music production in the 1960s and as a young McCoy established himself as one of the most sought after session musicians in the country.

Over the course of his nearly six-decade career as a session musician, harmonica virtuoso, and multi-instrumentalist Charlie McCoy has appeared on thousands of country, pop, and rock recordings. A member of the Country Music Hall of Fame, the Musicians Hall of Fame, and the West Virginia Music Hall of Fame, McCoy also led the famous “Million-Dollar Band” on the syndicated country music program Hee Haw for more than two decades.

"We've been waiting for McCoy to tell us his story and can be grateful that he has now done so in such compelling and entertaining fashion."
No Depression

“One of the first serious, substantive books by a major participant in the Nashville recording scene. McCoy’s recollections and insights offer a new and fascinating perspective on the development and expansion of the country music industry.”
Rich Kienzle, author of The Grand Tour: The Life and Music of George Jones