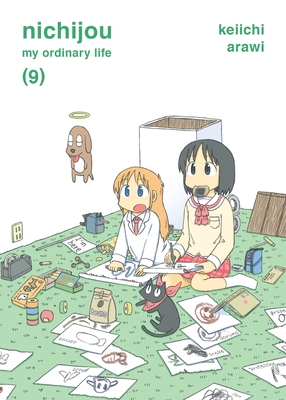 This is book number 9 in the Nichijou series.

Yuuko has a depressing doppelganger. Tanaka has a secret weapon. Mai becomes engrossed in a new best-seller. Mio squares off with a strange new vending machine, and a near-death experience creates chaos for a guardian angel...
Keiichi Arawi (1977-) is a professional comic artist and illustrator. Originally from Gunma, Japan, he was raised in the city of Maebashi. By the time he was 19 he entered the world of comics drawing short stories for Media Factory's Comic Flapper (My Neighbor Seki, 7 Billion Needles). While his first series KazeMachi was short-lived it caught the attention of one of the bigger publishers in Japan, Kadokawa Publishing.