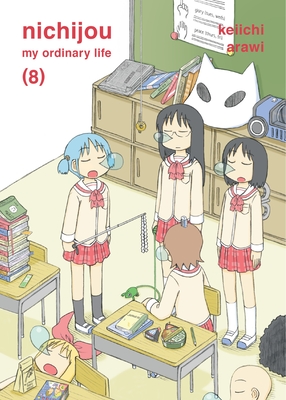 This is book number 8 in the Nichijou series.

A U.F.O. causes Yuuko’s lunch to come out her nose. Ms. Nakamura tries an adorable new ploy. Mihoshi’s big plan backfires. Mai successfully dodges a trap. Hypnosis doesn’t work, until it works all too well. And Weboshi might actually be able to read minds...
Keiichi Arawi (1977-) is a professional comic artist and illustrator. Originally from Gunma, Japan, he was raised in the city of Maebashi. By the time he was 19 he entered the world of comics drawing short stories for Media Factory's Comic Flapper (My Neighbor Seki, 7 Billion Needles). While his first series KazeMachi was short-lived it caught the attention of one of the bigger publishers in Japan, Kadokawa Publishing.