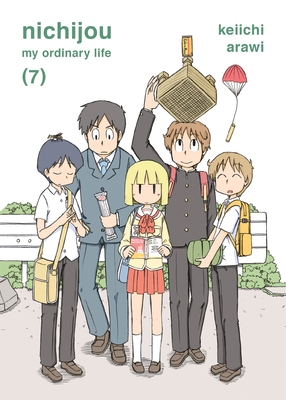 This is book number 7 in the Nichijou series.

Mio makes an abrupt confession. Mihoshi tries to help her sister Misato confess her feelings to her crush. Mai heeps pulling the rug on Yuuko with her deceptive sense of humor. Tanaka stubbornly refuses to break a promise to Nakanojou. Yuuko gets mistaken for a celebrity, and Mr. Takasaki unwittingly foils Ms. Nakamura's sneaky plans...
Keiichi Arawi (1977-) is a professional comic artist and illustrator. Originally from Gunma, Japan, he was raised in the city of Maebashi. By the time he was 19 he entered the world of comics drawing short stories for Media Factory's Comic Flapper (My Neighbor Seki, 7 Billion Needles). While his first series KazeMachi was short-lived it caught the attention of one of the bigger publishers in Japan, Kadokawa Publishing.