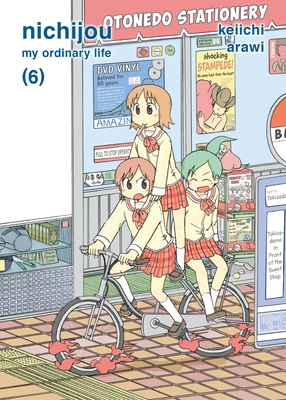 This is book number 6 in the Nichijou series.

Mio finally has her dream come true. Ms. Nakamura ends up in a nightmare situation after discovering the shinonome lab. The Princess goes on a rampage to recover wood cubes. Mai makes a new friend, and nio makes a heartbreaking discovery that propels her to learn something important about life...
Keiichi Arawi (1977-) is a professional comic artist and illustrator. Originally from Gunma, Japan, he was raised in the city of Maebashi. By the time he was 19 he entered the world of comics drawing short stories for Media Factory's Comic Flapper (My Neighbor Seki, 7 Billion Needles). While his first series KazeMachi was short-lived it caught the attention of one of the bigger publishers in Japan, Kadokawa Publishing.