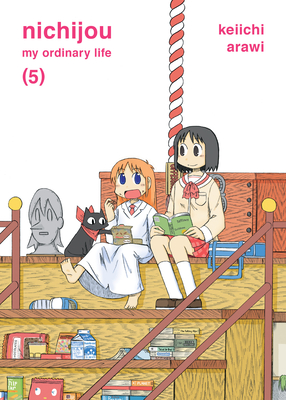 This is book number 5 in the Nichijou series.

Mio enlists her friends to help her meet a major manga deadline. Mr. Takasaki makes a deal with the devil to get closer to his crush. Sakamoto's scarf is repurposed for a chatty crow. a sacred temple must fend off a new brand of fiend, and Ms. Nakamura is tripped up in her quest to capture Nano by a deeply unscientific reaction to compliments.

tag along for more typically atypical days in Tokisadame...
Keiichi Arawi (1977-) is a professional comic artist and illustrator. Originally from Gunma, Japan, he was raised in the city of Maebashi. By the time he was 19 he entered the world of comics drawing short stories for Media Factory's Comic Flapper (My Neighbor Seki, 7 Billion Needles). While his first series KazeMachi was short-lived it caught the attention of one of the bigger publishers in Japan, Kadokawa Publishing.