The Everyday Life of Memorials (Hardcover) 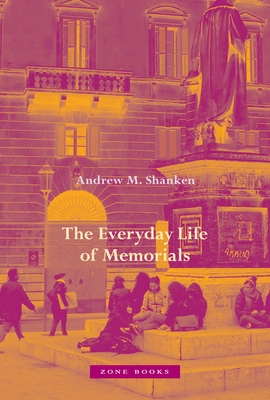 The Everyday Life of Memorials (Hardcover)

A timely study, erudite and exciting, about the ordinary--and oftentimes unseen--lives of memorials

Memorials are commonly studied as part of the commemorative infrastructure of modern society. Just as often, they are understood as sites of political contestation, where people battle over the meaning of events. But most of the time, they are neither. Instead, they take their rest as ordinary objects, part of the street furniture of urban life. Most memorials are "turned on" only on special days, such as Memorial Day, or at heated moments, as in August 2017, when the Robert E. Lee monument in Charlottesville was overtaken by a political maelstrom. The rest of the time they are turned off. This book is about the everyday life of memorials. It explores their relationship to the pulses of daily life, their meaning within this quotidian context, and their place within the development of modern cities. Through Andrew Shanken's close historical readings of memorials, both well-known and obscure, two distinct strands of scholarship are thus brought together: the study of the everyday and memory studies. From the introduction of modern memorials in the wake of the French Revolution through the recent destruction of Confederate monuments, memorials have oscillated between the everyday and the "not-everyday." In fact, memorials have been implicated in the very structure of these categories. The Everyday Life of Memorials explores how memorials end up where they are, grow invisible, fight with traffic, get moved, are assembled into memorial zones, and are drawn anew into commemorations and political maelstroms that their original sponsors never could have imagined. Finally, exploring how people behave at memorials and what memorials ask of people reveals just how strange the commemorative infrastructure of modernity is.
Andrew M. Shanken is Professor of Architecture at the University of California, Berkeley. He is the author of 194X: Architecture, Planning, and Consumer Culture on the American Home Front and Into the Void Pacific: Building the 1939 San Francisco World's Fair.