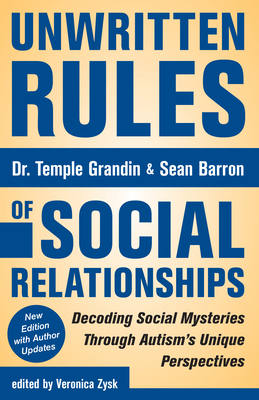 
Not On Our Shelves—Ships in 1-5 Days
Born with autism, both Temple Grandin and Sean Barron now live famously successful social lives. However, their paths were quite different. Temple's logical mind controlled her social behavior. She interacted with many adults and other children, experiencing varied social situations. Logic informed her decision to obey social rules and avoid unpleasant consequences. Sean's emotions controlled his social behavior. Bafﬂed by social rules, isolated and friendless, he made up his own and applied them to others. When they inevitably broke his rules, he felt worthless and unloved. Both Temple and Sean ultimately came to terms with the social world and found their places in it. Whether you are a person with autism, a caregiver in the autism community, or just someone interested in an outsider view of society, their powerful stories will enthrall and enlighten you. The first edition of Unwritten Rules of Social Engagement was the Silver Award Winner of the Book of the Year Awards and the original edition sold more than 40,000 copies in hard cover.