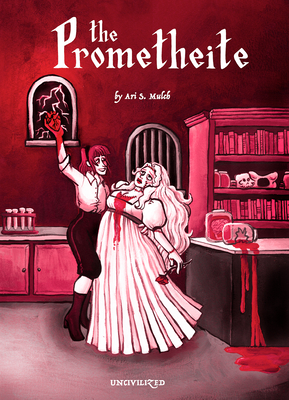 
On Our Shelves Now at:
Prometheite reimagines Mary Shelley's Frankenstein as a lesbian romantic tragedy. Two young women, Aveline and Violet, meet at the University of Ingolstadt and quickly bond over their interest in anatomy, the occult, and one another. But, before their love can fully bloom, Aveline dies. Violet resorts to dark sciences to keep the forbidden romance alive and resurrects Aveline. But all is not well. Aveline suspects something unnatural about her life as Violet struggles to keep the resurrection a secret. Will toying with the forces of nature doom their forbidden relationship? Prometheite is Ari Mulch's first graphic novella.
Ari S. Mulch is a cartoonist, painter, printmaker, and connoisseur of women. Created in a horrific experiment by two small-town goths, they are the most influential person to come out of Springfield Illinois since Abraham Lincoln. Ari fled the flatlands in 2015 to study comic art and printmaking at the Minneapolis College of Art and Design. Their soul was soon captured by the dark forces of lesbianism and comics with lots of sex and swearing, and they have been toiling away at their tales of dark hysteria ever since.