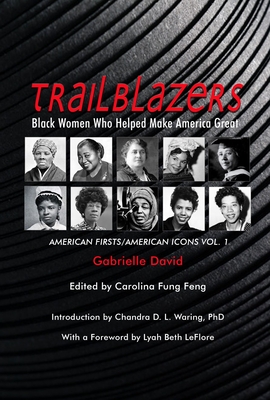 
Not On Our Shelves—Ships in 1-5 Days
Since slavery, Black women have struggled to liberate themselves from racism and sexism. Yet despite these hurdles and under the most difficult circumstances, they managed to achieve greatness. TRAILBLAZERS shines a light on these their accomplishments, which often led to widespread cultural change. TRAILBLAZERS is a six-volume series that examines the lives and careers of over four hundred brilliant women from the eighteenth century to the present who blazed uncharted paths in every conceivable way.

Each TRAILBLAZERS volume is organized into several sections. Along with biographical information and powerful photographs, David provides a historical timeline for each section—written from the viewpoint of Black women—that maps out the significance of the featured women that follow.

Volume 1 features an assortment of sixty-five activists, dancers, and athletes. We learn about the significance of activists like Ella Baker, Pauli Murray, Rosina Tucker, and Clara Day, who represent the hundreds of unnamed women who participated in the civil rights and labor movements. We re-discover dancers Jeni Legon and Margot Webb, who are honored alongside dance legends Josephine Baker, Katherine Dunham, Janet Collins, and a new generation of dancers including Misty Copeland, Dormeshia Sumbry-Edwards, and choreographers like Camille A. Brown, and Cynthia Oliver. And then there are the Black women athletes who disrupted the world of sports, from the nearly forgotten tennis champion Ora Washington and Alice Coachman—the first to compete and win in the Olympics—to Simone Biles, the most decorated gymnast in Olympic history. Throughout the series, as David re-introduces many of these women into the public sphere, they are not always in predictable ways. For example, Debbie Allen makes a brief appearance in this volume, not for her acting or as a director, but rather as the dancer she initially trained to be, reminding us that Black women are multifaceted, multitalented, and complex. What binds these women together is that as they struggled on the front lines, they shook up the status quo of Black people in America. Throughout the volume, David also challenges the socially conditioned assumptions, stereotypes, and false binaries that denigrate Black women’s bodies particularly in dance and sports, including the barriers they face in how they wear their hair. In this regard, David addresses the totality of Black womanhood: physically, culturally, and politically.

With painstaking research, David has created an affordable, visually rich, and accessible reference book. From the foremothers who blazed trails and broke barriers, to the women who follow in their footsteps, TRAILBLAZERS offers powerful and inspiring role models for women and girls from all cultural backgrounds and for the intellectually curious. TRAILBLAZERS is a clarion call for recognition of the transformative work Black women have done and continue to do. Written in accessible prose that contains personal reflections for a broad audience, TRAILBLAZERS also serves as a vital reference guide for use in schools and libraries.

Gabrielle David is a multidisciplinary artist, musician, photographer, digital designer, poet, and writer. David is the publisher of 2Leaf Press and serves as chair of the board of 2Leaf Press Inc. David is co-editor of What Does It Mean to be White in America? and Hey Yo! Yo Soy! 40 Years of Nuyorican Street Poetry, editor of Branches of the Tree of Life, and author of two poetry chapbooks.

Carolina Fung Feng, a translator and copyeditor specializing in Spanish translations, has worked on a number of 2Leaf Press titles, and is cotranslator of Hey Yo! Yo Soy! 40 Years of Nuyorican Street Poetry.

Chandra D. L. Waring is an assistant professor at the University of Massachusetts Lowell. Her research focuses on the growing bi/multiracial population. Her interest in race stems from being raised in a multiracial family in a three very different contexts: Germany, Georgia, and Connecticut. Her work has been published in numerous publications and she earned her Ph.D. in sociology from the University of Connecticut in 2013, where she was a Multicultural Fellow.


Lyah Beth LeFlore is a producer, cofounder of the Shirley Bradley LeFlore Foundation, and bestselling author of eight books, including Wildflowers and I Got Your Back, cowritten with Eddie and Gerald Levert.

"The first volume of an interdisciplinary, intersectional reference collection on influential Black women. . . . an inspiring, comprehensive work. With a multidisciplinary background in music, design, and poetry, David provides the model of activist scholarship that combines academic nuance and sophistication with an engaging writing style that is accessible to general readership, such as David’s essay that convincingly demonstrates how women served as the 'foot soldiers' of the civil rights movement. Backed by impressive endnotes and references, each chapter is encyclopedic in breadth while offering fresh analytical insights into Black women who are well covered in the existing literature, like Rosa Parks. . . . Accompanied by dozens of stark, powerful black-and-white photographs and portraits, this is a visually arresting volume whose words match the power of its images. An exciting resource in a promising, thorough multivolume celebration of Black women."
— Kirkus

"Trailblazers offers a depth unequalled in the arena of black women achievers, making this first volume in a six-book series a top recommendation for judicious collections. . . . Trailblazers, Black Women Who Helped Make America Great, American Firsts/American Icons is highly recommended for collections strong in women's issues, minority history and social change, and biography alike. There's nothing in print that holds the same depth of historical and social analysis, the attention to researched, footnoted facts . . . or the same ability to inspire."
— D. Donovan