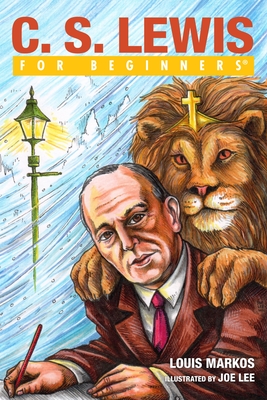 
On Our Shelves Now at:
C.S. Lewis For Beginners is a thorough examination of C. S. Lewis, the greatest Christian apologist of the twentieth century, throughout his career as an author and as a professor at Oxford University.

A Christian apologist defends Christianity as a consistent and coherent worldview that squares with human reason, history, and desire. It offers answers to every facet of our lives on earth as well as answers to our questions about what happens after we die.

What makes C.S. Lewis unique as an apologist is the way he balanced so perfectly reason and imagination, logic and intuition, and head and heart. In addition to writing such non-fiction apologetics books as Mere Christianity, The Problem of Pain, and Miracles, he wrote eleven novels: the seven Chronicles of Narnia, a trilogy of science-fiction adventures, and a haunting retelling of an old myth set in the ancient world. All eleven tell wonderful, captivating stories that stand on their own as fiction but that also support and bring to life the kinds of apologetical arguments he makes in his non-fiction. He also wrote two utterly unique works of fiction, The Screwtape Letters and The Great Divorce, that offer a fresh, highly original take on sin and temptation, angels and devils, and heaven and hell.

And that’s not all. Lewis the apologist and novelist had a day job. He was a celebrated English professor at Oxford, and then Cambridge, University who wrote works of literary criticism that are still famous today. C.S. Lewis For Beginners takes the reader through the wardrobe of his complete catalog of writing.
Louis Markos (Loumarkos.com) is a Professor of English and Scholar in Residence at Houston Baptist University, where he holds the Robert H. Ray Chair in Humanities. He teaches courses on British Romantic and Victorian Poetry and Prose, the Classics, C. S. Lewis and J. R. R. Tolkien, and Film.
He is the author of nineteen published books and two lecture series with the Teaching Company/Great Courses including: The Life and Writings of C. S. Lewis.

Illustrator Joe Lee is a cartoonist, writer, and illustrator of many titles in the For Beginners catalog.