Homo GoGo Man: A fairytale about a boy who grew up in discoland. (Paperback) 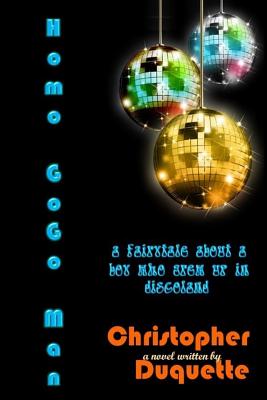 Homo GoGo Man: A fairytale about a boy who grew up in discoland. (Paperback)


Not On Our Shelves—Ships in 1-5 Days
(This book cannot be returned.)
Written in the first person, this fictional story is about a sexually suppressed boy who learns to dance to express himself, dance for a living, and dance to love life. Starting in the disco era of the 70's, the protagonist is introduced to the fast world of go-go dancing, hustling, drugs and underground clubs after his first man-on-man encounter while exploring Times Square after he arrives at college.The story continues on his odyssey to live the big life in New York City as he trips through clubs, more drugs, and a series of boyfriends for two decades until he bottoms out in his forties from too much of the above. "Homo GoGo Man," a play on words of the species 'homo sapien', is a tale of a gay man avoiding extinction.
Born in 1958, Northern California, up-rooted to attend public school in Upstate, New York. Remained in social exile until escaping to SUNY @ Stony Brook. Moved to Manhattan upon graduation. Lived, advanced in the corporate world, and danced in clubs for twenty-four years until bottoming-out. Became a man after a fresh start in Hudson Valley, trying to allow myself to do the next right thing. Involved in a committed relationship with my long time love of my life, Storm Orion. Succinct.