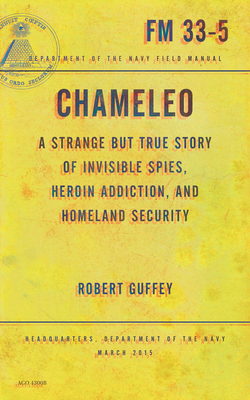 A mesmerizing mix of Charles Bukowski, Hunter S. Thompson, and Philip K. Dick, Chameleo is a true account of what happened in a seedy Southern California town when an enthusiastic and unrepentant heroin addict named Dion Fuller sheltered a U.S. Marine who'd stolen night vision goggles and perhaps a few top secret files from a nearby military base.

Dion found himself arrested (under the ostensible auspices of The Patriot Act) for conspiring with international terrorists to smuggle Top Secret military equipment out of Camp Pendleton. The fact that Dion had absolutely nothing to do with international terrorists, smuggling, Top Secret military equipment, or Camp Pendleton didn't seem to bother the military. He was released from jail after a six-day-long Abu-Ghraib-style interrogation. Subsequently, he believed himself under intense government scrutiny -- and, he suspected, the subject of bizarre experimentation involving "cloaking"-- electro-optical camouflage so extreme it renders observers practically invisible from a distance of some meters -- by the Department of Homeland Security. Hallucination? Perhaps -- except Robert Guffey, an English teacher and Dion's friend, tracked down and interviewed one of the scientists behind the project codenamed "Chameleo," experimental technology which appears to have been stolen by the U.S. Department of Defense and deployed on American soil. More shocking still, Guffey discovered that the DoD has been experimenting with its newest technologies on a number of American citizens.

A condensed version of this story was the cover feature of Fortean Times Magazine (September 2013).

Robert Guffey is a lecturer in the Department of English at California State University - Long Beach. A graduate of the famed Clarion Writers Workshop in Seattle, he is the author of a collection of novellas entitled Spies & Saucers (PS Publishing, 2014). His first book of nonfiction, Cryptoscatology: Conspiracy Theory as Art Form, was published in 2012. He's written stories and articles for numerous magazines and anthologies, among them Fortean Times, Mysteries, Nameless Magazine, New Dawn, The New York Review of Science Fiction, Paranoia, The Third Alternative, and Video Watchdog Magazine.