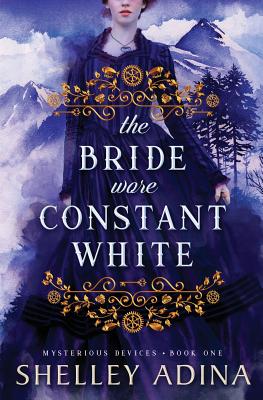 This is book number 1 in the Magnificent Devices series.

Daisy and Freddie were supposed to be her bridesmaids. Now they're solving her murder. In the steampunk Wild West, it's what friends do.

Margrethe Amelia Linden (Daisy to her friends) is a young woman of gentle upbringing, some talent as a watercolorist, and firm opinions that often get her into trouble. Determined to find her missing father, in the summer of 1895 she sets out for the last place he was seen: the Wild West. It's a rude shock when her younger sister stows away on the airship-such behavior no doubt the result of her unsuitable friendship with Maggie Polgarth and the Carrick House set.

On the journey, friendship blooms between Daisy and Miss Emma Makepeace, who is traveling to the Texican Territories as a mail-order bride. When Emma begs the girls to delay their search by a day or two in order to stand with her at the altar, Daisy is delighted to accept.

But the wedding day dawns on a dreadful discovery. Within hours the Texican Rangers have their man-but even in her grief, Daisy is convinced he cannot have killed her friend. She must right this terrible mistake before he hangs ... and before the real culprit realizes that two very observant young ladies are not going to allow him to get away with murder ...

Shelley Adina is the author of 24 novels published by Harlequin, Warner, and Hachette, and over a dozen more published by Moonshell Books, Inc., her own independent press. She writes steampunk and contemporary romance as Shelley Adina, and as Adina Senft, writes Amish women's fiction. She holds an MFA in Writing Popular Fiction from Seton Hill University in Pennsylvania, where she teaches as adjunct faculty, and she's currently pursuing a PhD in Creative Writing. She won RWA's RITA Award(R) in 2005, and was a finalist in 2006. When she's not writing, Shelley is usually quilting, sewing historical costumes, or hanging out in the garden with her flock of rescued chickens.