A Rebel's Journey: My Path to Liberty (Paperback) 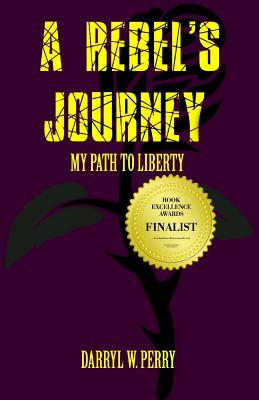 A Rebel's Journey: My Path to Liberty (Paperback)


Not On Our Shelves—Ships in 1-5 Days
(This book cannot be returned.)
In 1999 Darryl W. Perry began a search for traditional values, which lead him down a path to the ideas of liberty. He tells the story in A Rebel's Journey: My Path to Liberty. "When you read stories about various persons paths to liberty, it's amazing how many of these people have been 'questioning authority' since they were barely out of diapers. A Rebel's Journey definitely puts Darryl Perry into this camp... where he stands out is in the very methodical way that he came to each conclusion on a subject of freedom. Sometimes it's funny, and sometimes I think it's crazy, but it's always authentic. This is a heartfelt memoir, but it's one with a point. And the point is: Anyone can find real freedom, no matter how winding the road is." Dr. Brian Sovryn, Sovryn Tech "The soft spoken journey of one of the most hardcore peace activists is a rational take on the everyday logic of anarchism. Darryl Perry sees the beauty of freedom. The reader sees his beautiful soul." Angela Keaton, Antiwar.com "It's sad that the world is getting so bad that yearning for freedom is a rebellious act. But, for those who do want to rebel against tyranny this book is an excellent start down that path." Jeff Berwick, The Dollar Vigilante
Darryl W. Perry has spent most of his adult life as an advocate & activist for peace and liberty. Darryl is an award winning author, publisher & radio/TV host, and is a regular contributor to several weekly and monthly newspapers. He hosts several podcasts, and is a regular co-host on Free Talk Live. Darryl is a co-founder of the NH Liberty Party, and was on the National Committee of the Boston Tea Party from 2008-2012. He was the longest serving member of the National Committee, and was twice elected Chair. The BTP dissolved in July 2012 after he resigned as Chair. Darryl is the Owner/Managing Editor of Free Press Publications, a business he started in June, 2009 with the purpose of ensuring a FREE PRESS for the FREEDOM MOVEMENT. Since then FPP has republished several libertarian classics as well as new books, both fiction and non-fiction, many of which have won awards and other recognition. Darryl is running for President in 2016 to spread the message of peace, freedom, love & liberty!