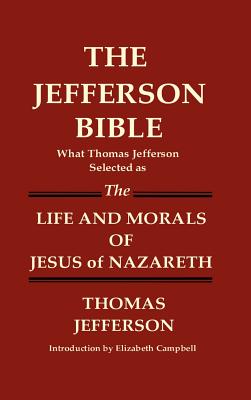 
Not On Our Shelves—Ships in 1-5 Days
(This book cannot be returned.)
In 1820, Thomas Jefferson worked for months, often by candlelight, carefully cutting the pages of several Bibles to remove the life story and the teachings of Jesus, which he called "the most benevolent code of morals which has ever been offered to man". He then reorganized the verses from all four gospels chronologically and pasted them into a new book that he titled, The Life and Morals of Jesus of Nazareth Extracted Textually from the Gospels in Greek, Latin, French and English. Too controversial to be published during Jefferson's lifetime, The Jefferson Bible eliminated the virgin birth, angels, Jesus's miracles, and his resurrection. This edition, The Jefferson Bible: What Thomas Jefferson Selected as the Life and Morals of Jesus of Nazareth, includes The Jefferson Bible in English--nicely formatted for ease of reading--with an introduction to Jefferson's life and complex religious views by Elizabeth Campbell, and an index showing the passages that Jefferson selected and how he reorganized them. This reader-friendly edition is highly recommended and makes a welcome companion to the Smithsonian Institution's 2011 multilingual facsimile. The combination of Jesus's moral teachings and Thomas Jefferson's thought-provoking compilation of them-plus an informative introduction to Jefferson's religious and political views-makes it an excellent choice for both adults and younger readers.