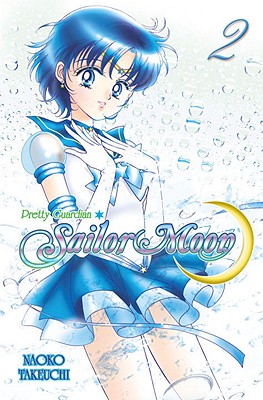 This is book number 2 in the Sailor Moon series.

The mysterious Tuxedo Mask has revealed his identity, forcing Usagi to come to terms with her growing affections for the masked vigilante, all the while defending the people of Earth from renewed attacks by the sinister “enemy”. Everything threatens to overwhelm even Sailor Moon when suddenly a new Sailor Guardian appears. Could this new Guardian be the Moon Princess the Sailor Guardians are sworn to protect?

- An entirely new, incredibly accurate translation!
- Japanese-style, right-to-left reading!
- New cover art never before seen in the U.S.!
- The original Japanese character names!
- Detailed translation notes!
Naoko Takeuchi lives in Tokyo, Japan. Takeuchi's works have a wide following among anime and manga fans worldwide. Her most popular work, Sailor Moon, rose to become as of 2011 one of the most recognized manga and anime products to date. The author lives in Tokyo, Japan.
"With its whimsical sense of fashion, thrilling adventure and complex backstory, Sailor Moon was like little else young girls had ever before seen on television, and miles above anything American animators were offering them. The anime led to interest in the manga, which in turn became the sort of success that made the bookstore market sit up and take notice. Scratch a modern-day manga fangirl, and you're likely to find someone who watched Sailor Moon when she was young." -The Comics Journal