The Price Of Silence: Muslim-Buddhist War Of Bangladesh And Myanmar - A Social Darwinist's Analysis (Paperback) 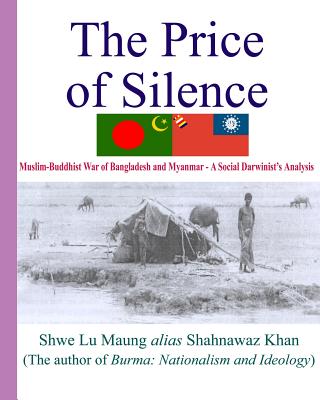 The Price Of Silence: Muslim-Buddhist War Of Bangladesh And Myanmar - A Social Darwinist's Analysis (Paperback)


Not On Our Shelves—Ships in 1-5 Days
(This book cannot be returned.)
Dr. Shwe Lu Maung alias Shahnawaz Khan, Ph.D., is a former Burmese guerrilla who became a biological scientist. Besides this book, his publications (http: //www.shwelumaung.org/publications) includes 46 scientific research articles, a book Burma Nationalism and Ideology, two Burmese short stories, fourteen journalistic articles and numerous political communiques featuring Decolonization of Burma and Manifesto of Arakan Democratic Forces (http: //www.shwelumaung.org). Born rebel, he is a descendant of Rakkhapura Kingdom, which is now a hidden colony inside Myanmar (http: //www.shwelumaung.org/RakhaingNation). As a Rangoon University student his ambition was to become a member of parliament. Opposing the military government, which came to power through a military coup in 1962, he counted himself in a guerrilla force upon his graduation with a B.Sc. Honours Degree in Zoology. But a year later, he left the jungle to become a demonstrator (junior faculty) in the Department of Zoology, Rangoon University. He won a Colombo Plan Scholarship and earned his master degree (1973) in Embryology and Mammalian Reproduction and doctoral degree (1976) in Reproductive Endocrinology under the guidance of Sir Brian Follett, D.Sc., OBE, at the University of Wales. After is doctoral degree he served Bangladesh as a research and development scientist in his capacity of the Chief Scientific Officer at the Bangladesh Institute of Research and Rehabilitation in Diabetes, Endocrine and Metabolic Disorders (BIRDEM). He is now a US citizen and earned his living as a laboratory research scientist in canine genetic research project at the University of Missouri, Columbia, USA (http: //www.canine-epilepsy.net). In the political arena, he was a member of the Rakhaing Network for Federation and Democracy in Burma, Central Committee of the Arakan National United Organization, Bangladesh Chapter Secretary of the Committee for Restoration of Democracy in Burma, Central Committee of the Democratic Alliance of Burma, Diplomatic Representative of Arakan League for Democracy, and Patron and Chief Executive Officer of the Arakan Democratic Forces. He retired from Burmese politics in 2001. He lives a quiet life in the United States with his wife and two children.