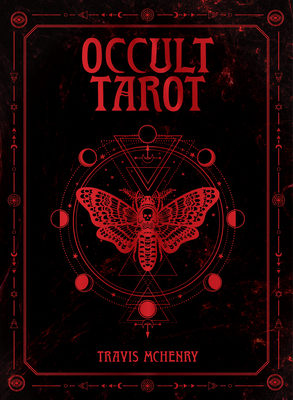 How can we possibly embrace our truest self if we never step into the dark?

Author and occultist Travis McHenry reveals the secret daemons of the 17th-century and conjures their powers into this unique set of 78-divination cards.

Drawing on daemons, symbols, and sigils from ancient magickal grimoires including Archidoxis Magica and the Key of Solomon, Occult Tarot presents a fully realized divination tool to finally embrace and behold the mysteries of the night.

The first tarot deck to faithfully adhere to the Solomonic principles of demon conjuration, Occult Tarot allows practitioners to discover the power of ancient demons and learn to tame the beasts that wander between the physical and spiritual worlds.

One of the foremost occultists of the modern era, Travis McHenry has written books on the history of the tarot and a memoir about his ten-year research study into paranormal phenomena. A native of rural Pennsylvania, Travis grew up surrounded by the folklore of the Appalachian Mountains, which shaped his desire to uncover and share the historical truths hidden behind mythological stories.

He began studying the dark arts in the late 1990s when he stumbled upon a secretive coven of witches who subsequently befriended him and allowed him to publish the first written history of their magical tradition. Travis has been a student of many religions, including Buddhism, Jainism, Hinduism and the Greek Pantheon, and was an ordained deacon in the Baptist Church. This diverse spiritual background has given him a unique insight into harnessing the divine energies found in cultural groups around the world. His formal education in anthropology helps balance his spiritual training with a scientific mindset.

From 2001 to 2008 Travis served as an intelligence specialist in the United States navy, using his powers of analysis and research to track terrorist groups and determine the military capabilities of foreign countries. After leaving the military, Travis entered the corporate world as a recruiter for the largest telephone psychic company in the world. As the most successful psychic recruiter in the industry, he pioneered a concrete process for discovering and authenticating individuals with intuitive powers that is still used to this day. For more information visit www.bloodstone.info.